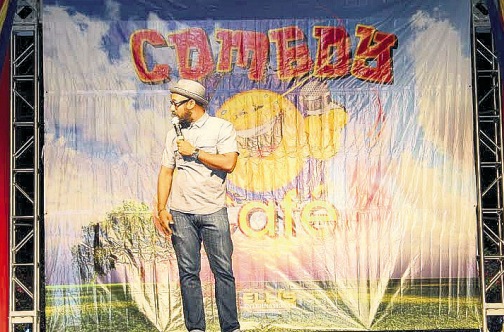 The Jamaica Observer focuses on Trinidadian comedian based in Canada, Jean Paul:

Seventeen years ago Jean Paul quit his job at the Trinidad and Tobago Consulate in Canada to pursue his love for comedy. He has no regrets. “I’ve been doing live comedy since I left my full-time job in 1998. This is what I have been doing and will continue,” the 45-year-old comedian told the Jamaica Observer backstage at last week’s FLOW Comedy Café.

He was a special guest performer on the series. It was Paul’s third appearance in Jamaica. “Comedy is something I have wanted to do from I was 12 years old. At first, I wanted to be a pilot so I could travel the world, but doing comedy and performing in different places, such as South America, the USA, the Caribbean and all across Canada, has given me the opportunity to travel,” Paul explained.

Born in Trinidad and Tobago, his family relocated to Canada when he was an infant. “Even though I live in Canada, I try to keep my roots as close to my art as possible,” said Paul. “Where I grew up in Canada, all the West Indians are one. I learnt to appreciate everyone’s culture.”

Staying close to those roots helps whenever he performs before Caribbean audiences, like at the FLOW Comedy Café [in New Kingston, Jamaica].