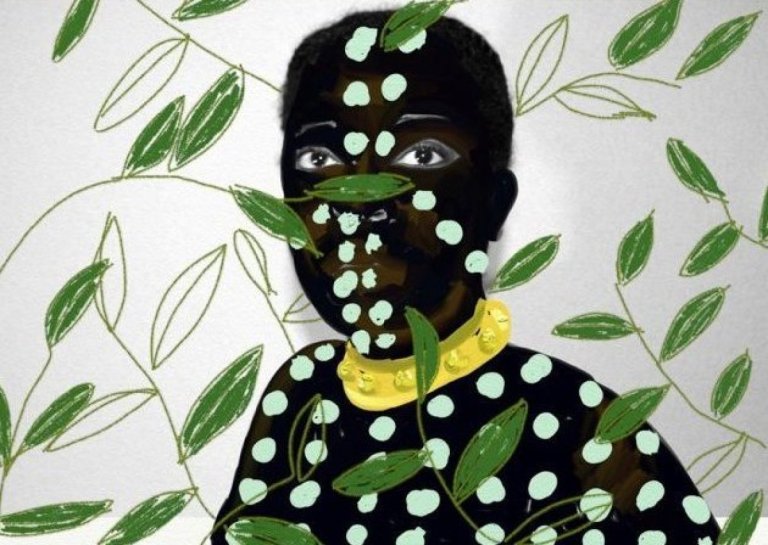 Jacqueline Bishop (author, artist, NYU master teacher) recently published an in-depth article on Jamaican artist Oneika Russell’s trajectory, interests, and work, including her most recent series, “A Natural History,” created while living in Kyoto, Japan. Here are just a few excerpts; I highly recommend the full article, which you can access in the link below:

There was the outline of a face and a body with no distinguishable features, but for the eyes. Behind this figure was a city/landscape and the figure seemed to be infused with bright colorful Caribbean foliage/flowers. I was immediately intrigued by the series in which female characters were at times engorged by or hidden behind the common flowers of the Caribbean.

The work in question is part of artist Oneika Russell’s “A Natural History” body of work. This is a series the Jamaican-born artist created mostly while living in Kyoto, Japan, and in the work she sought to represent the experience of being an outsider in a culture that at first seemed very alien to her. Said the artist, “I was trying to understand how to make an image which conveyed what the tropical body and a tropical identity might be or look like.” This fusion of the black body and Caribbean foliage would eventually become an artist’s book printed in 2015. “A Natural History,” thus far, is Oneika Russell’s most well-known work.

Oneika Russell was born in St. Andrew, Jamaica, and graduated from Knox College High School. She attended sixth form at Ardenne High School in Kingston. It was while she was in sixth form that her doodling would give way to an identifiable interest in the visual arts. Eventually, she would attend the Edna Manley College of Visual and Performing Arts on the island, as a Painting major, though she did take a few courses in photography. At Edna Manley, Russell started doing research for an Aunt Jemima-like character she called Cookie, who would become the basis of her thesis work. Cookie was a commentary on the tourist industry and a critique of race, color and class issues in Jamaica. It is a particularly engaging body of work. [. . .]

[Many thanks to Rod Fusco for bringing this item to our attention.]