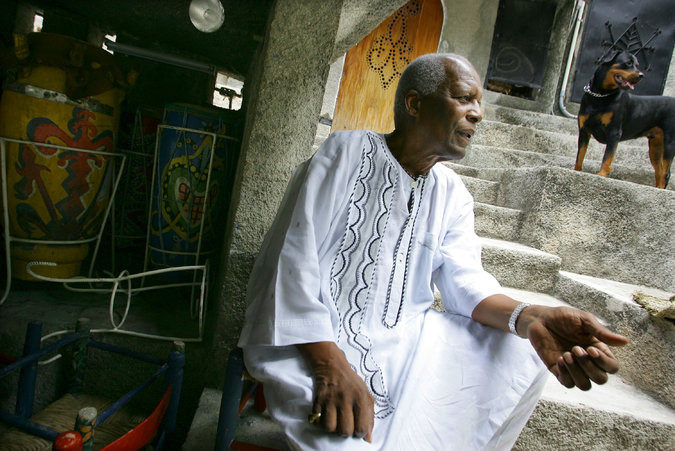 Max Beauvoir, a former City College of New York chemistry major who gave up hard science for magic spirits, spell-casting and ritual animal sacrifices vital to becoming Haiti’s high priest of voodoo, died on Saturday in Port-au-Prince, the capital. He was 79.

His death was announced by the president of Haiti, Michel Martelly, who described it as a “great loss for the country.”

Mr. Beauvoir was in his mid-30s and planning a career in biochemistry when his grandfather, on his deathbed, stunningly anointed him his successor as a houngan — one of the 6,000 or so healers, soothsayers, exorcists and therapists who outnumbered doctors and Roman Catholic priests in Haiti. The 17th-century mystical traditions imported by slaves from West Africa and known in Haiti as Vodou coexist there with Christianity.

“Just as a carnival band went by the house,” Mr. Beauvoir recalled in a 1983 interview with The New York Times, “grandfather turned to me and said, ‘You will carry on the tradition.’ It was not the sort of thing you could refuse.”

In 2008, when Mr. Beauvoir was 72, Haiti’s houngans, frustrated with being marginalized by their impoverished nation’s elite, formed a national federation and chose him as supreme chief.

“My position as supreme chief in voodoo was born out of a controversy,” he said. “Today, voodooists are at the bottom of society. They are virtually all illiterate. They are poor. They are hungry. You have people who are eating mud, and I don’t mean that as a figure of speech.”

From a lavish temple and clinic just outside Port-au-Prince, Mr. Beauvoir lobbied for official recognition for the houngans as healers and sought to transform the Hollywood image of voodoo from that of shamans pricking effigies and wrangling zombies to that of priests of a natural order that bonds body and soul and encompasses a single god, some 400 spirits, reincarnation and countless raucous and colorful rituals.

In her 1989 book “The Rainy Season: Haiti Since Duvalier,” the journalist Amy Wilentz characterized Mr. Beauvoir as an opportunist with “the oily manner of a man whom you wouldn’t want to leave alone with your money or your child.”

Yet many Haitians regarded him as the most outspoken defender of a religion that helped stabilize a fragile society but that was not officially recognized until 2003. They saw him as a polished spokesman who could navigate between African and Western cultures and insinuate voodooism into Haitian government policy.

To make money, Mr. Beauvoir also practiced voodoo tourism. In 1975 he staged a ceremony for Bill and Hillary Rodham Clinton on their honeymoon. In his memoir “My Life” (2004), Mr. Clinton recalled, “The spirits arrived, seizing a woman and a man.”

He added: “The man proceeded to rub a burning torch all over his body and walk on hot coals without being burned. The woman, in a frenzy, screamed repeatedly, then grabbed a live chicken and bit its head off.”

Mr. Clinton did not elaborate on whether the man and woman benefited from the ceremony, except to say, “Haitians’ understanding of how God is manifest in our lives is very different from that of most Christians, Jews or Muslims, but their documented experiences certainly prove the old adage that the Lord works in mysterious ways.”

So, according to his critics, did Mr. Beauvoir.

He was linked with Jean-Claude Duvalier, the dictator who fled the country in 1986 after a popular uprising, and he opposed a democratically elected successor, Jean-Bertrand Aristide. Mr. Beauvoir fled in the 1990s with his wife and two daughters to Washington, where he founded a voodoo temple and lived for about a decade.

François Max Gesner Beauvoir was born in Haiti on Aug. 25, 1936, the son of a doctor. He earned a degree in chemistry from City College in 1958 and attended the Sorbonne in Paris to study biochemistry.

Returning home in the early 1970s, he applied for a patent to extract cortisone from the sisal plant and was planning to start production when his grandfather died and anointed him a houngan.

Although he had not been particularly spiritual as a young man, Mr. Beauvoir became the public face of voodoo and its most prominent promoter, even before he was chosen as chief priest.

“Haiti has a Western veneer, with an educational system, courts and a government,” Mr. Beauvoir said in 1983, “but this has very little to do with the way things really work. We should stop being ashamed and recognize what we are: a country with an African social structure that revolves around the voodoo community. Voodoo governs everything, our moral codes, the way we rationalize, eat, cure, and work the land.”

“We have to find a Haitian answer in harmony with what we are,” he said.