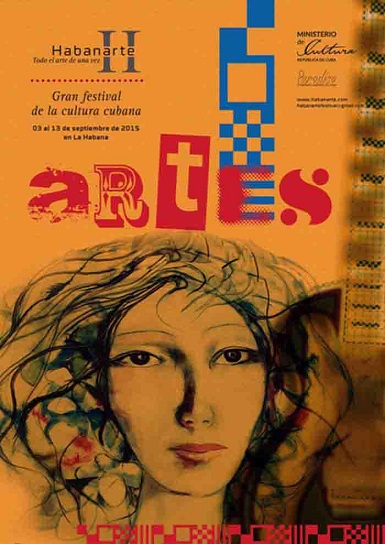 Prensa Latina and Granma, among other media, reported that the Habanarte Festival opened today in Havana, Cuba’s National Theater, with a great concert by Venezuelan band Dimension Latina. The festival, at gathering different cultural expressions (with around 700 cultural activities, distributed in some 70 sites), continues through September 13. Granma International describes: “Over 10 days, a varied cultural program, under the title of Habanarte, will offer ‘all the arts at once,’ the maxim which has defined the festival since its first edition in 2014.” Prensa Latina writes:

The Teatro Nacional’s Avellaneda hall will host the performance of the group, together with Cuban orchestra Adalberto Alvarez y su son, and Isaac Delgado. Later, on September 5, the music group from Caracas will perform at La Tropical’s Salon Rosado Benny More, considered the palace for dancers in Havana, also accompanied by local artists, such as Manolito Simonet and Tania Pantoja.

[. . .] During this second edition, the event includes international guests, such as C.J. Ramone, former member of punk band The Ramones, who will perform on September 12 and 13, at the Maxim Rock and the ALBA Culture Center in Havana, respectively. The Colombian orchestra La Ley and Argentine duo TIK are also among the foreign artists attending the festival.

Under the premise of All Art at Once, the project brings together the wide range of artistic expressions that come together in this capital, Deputy Culture Minister, Fernando Rojas, said.

Also, Diana Ferreiro (Granma International) writes: In addition to La Dimensión Lati­na, other international artists will be participating in the Habanarte Festival, including Argentine music project Tik, scheduled to perform September 10, at 7:00 p.m. in the Casa de las Américas, while CJ Ramone, former member of the New York punk band The Ramones will hold various gigs throughout the festival, including a final concert in the Casa del Alba on September 13, at 8:00 p.m.
As well as music, the program includes visual arts expositions, performances by theatre and dance groups, film screenings, workshops, talks and guided visits around museums and other cultural institutions.
Around 700 presentations by 1,500 artists will bring this second edition of Habanarte to life, an event which will take place across almost all the capital’s cultural institutions, inviting the public to take part.