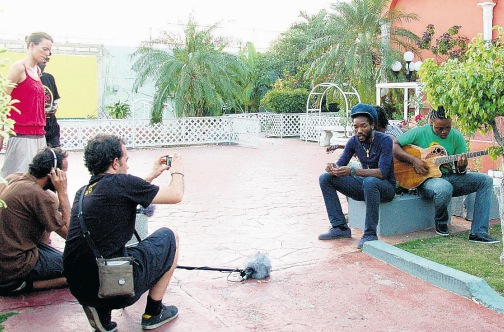 Howard Campbell (Jamaica Observer) reports that a French website dedicated to reggae that has been around since 2007—unitedreggae.com—has launched an Internet series featuring Jamaican artists performing in acoustic form under the category “Jamaican Raw Sessions.”

Jamaican Raw Sessions is the title of the project by unitedreggae.com. It showcases a number of performers as well as such as Max Romeo, Kabaka Pyramid, Wild Life and Derajah.

The sessions, done at the homes of artistes recording studios, were recorded in February when a team from unitedreggae.com were in Jamaica. “The most satisfying thing was to catch very natural and raw performances by talented artistes in their Jamaican yard in a professional, but joyful way. All artistes were really welcoming, accessible and glad to participate,” Monchicourt told the Jamaica Observer.

Most of the 14 ‘performances’ have been posted on the website’s Youtube channel. Co-Founder and CEO of United Reggae Camille Monchicourt plans to release videos of more artistes late this year, including Anthony B and Jah9.

Monchicourt and his crew filmed the sessions during visits to locations like Max Romeo’s home in rural St Catherine and Caveman studio in east Kingston. [. . .]

2 thoughts on “Jamaican Raw Sessions: The Raw Side of Reggae”