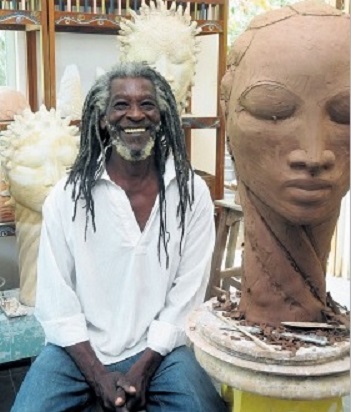 In “Head to Head with Gene Pearson,” Richard Johnson (Jamaica Observer) writes about ceramic artist and sculptor Gene Pearson, who, says Johnson, is “in a good place.” Pearson is among a number of artists who will receive an insignia for Commander of the Order of Distinction during the National Honours and Awards Ceremony at Kingâs House on October 19. 2015. Read excerpts here and access the full article in the link below:

[. . .] The slender, dreadlocked Pearson cracks a smile when he speaks of his most recent accolade which sees him being upgraded from the Order of Distinction Officer Class (OD) to the Commander of the Order of Distinction (CD), Jamaica’s sixth highest honour. “It’s great to know somebody is looking on and that I am being noticed,” he told the Sunday Observer during an interview in his airy studio, high in the St Andrew hills with a panoramic view of the city and harbour below.

[. . .] Pearson readily speaks of being a country man. Born in Wood Hall, St Catherine, the same community with spawned Prime Minister Portia Simpson Miller, he stressed that having started out without much made him very open to new ideas once he moved to city Kingston in the early 1960s.

He was one of the early students of what has become the School of Art, and speaks with pride at being part of that second generation of Jamaican artists, following in the footsteps of founding fathers Eugene Hyde, Barrington Watson and Karl Parboosingh. He would also be one of the first student for master potter Cecil Baugh. The travels and experiences of these artists and teachers would have a profound impact on a young Pearson.

[. . .] Today, Pearson sources his clay both locally and from California in the US, a city which had also brought him much acclaim. For 25 years, he would travel between Jamaica and Berkeley, California, because as he put it, “I went there to grow”. [. . .] “Thanks to technology, I can now stay right here in Jamaica and with Facebook I can see how people are reacting to my work. So I take orders and send to people all over the world. It’s a good time.”

Not one for frequent exhibitions of his work, Pearson has been coerced into showcasing his work alongside fellow local artist Cecil Cooper, but a date is yet to be set for this event scheduled for next year. But before that, his yearly open studio is set for December. [. . .]

One thought on “Jamaican Art: “Head to Head with Gene Pearson””