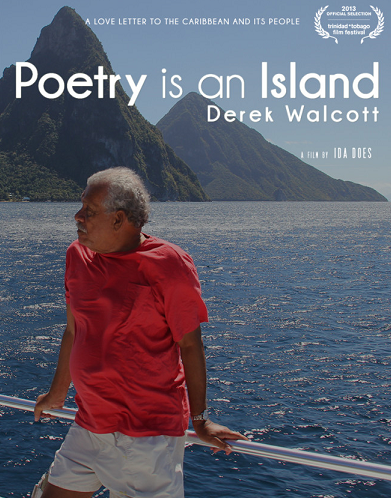 In “A Tribute to Great St. Lucian(s),” Sharif El Gammal reviews the 2013 documentary film by Ida Does, Poetry is an Island. He stresses that “Does’s documentary is an honest portrayal of Walcott, his life and work,” adding that it shows the man amidst all his triumphs and yes, imperfections.” Here are excerpts followed by a link to the original below:

Towards the end of Poetry is an Island, the recent documentary film directed by Ida Does, Derek Walcott’s longtime friend Arthur Jacobs, an actor and dancer, says that as the great poet gets older he is coming to terms with his own mortality. Jacobs can’t imagine St. Lucia without Walcott, for it would be a dark place indeed. [. . .]

Jacobs reads this passage as if he were reading from his prayer book or the Bible. Alone in his wooden house, surrounded by photographs of a past acting career framed and hanging on the walls, Jacobs strikes a figure in stark contrast to the 1992 Nobel in Literature. Whereas the eighty-five-year-old Walcott still possesses a razor-sharp memory, allowing him at so advanced an age to still put on plays, the same, unfortunately, cannot be said about Jacobs. The former leading man, who is unable to remember his lines, can no longer find work acting. The contrast between Jacobs in his home and Walcott on his estate is breathtaking in that it not only gives the viewer a perspective on how wealth and the concept of “success” is measured, but also nods towards Walcott’s humble origins, his roots. Remember: he and his family grew up in a house no different from Jacob’s, and Does makes sure this is not forgotten. But Jacob’s success—his legacy, if you will—is also celebrated. A brief two-second shot of a Certificate of Achievement—mounted—from a local theater group commending him on his dancing, draws the viewer closer to Jacobs; lifetime dedicated to the craft of acting will not go unnoticed. Does honors Jacobs because he represents St. Lucia as much as the Nobel Laureate.

The artist Dunstan St. Omer, called “Gregorias” in Walcott’s poems, reads from Part Two of Another Life in his interview with Does. He says, “I have been written about by a great man. So, I will live on forever as Poetry, myself and my family.” [. . .]

Having these two great St. Lucians read poems from two distinct stages in Walcott’s career does more for St. Lucia and for the poetry itself than to show scenes from Stockholm, Walcott rubbing shoulders with members of the Academy and Swedish nobility, and a voiceover of him giving the Nobel Lecture, “Antilles: Fragments of Epic Memory,” in the background. Does presents the scene at Stockholm at the moment Walcott approaches the podium and addresses the Academy. Before reading from the lecture, however, he honors St. Lucia, its people, and the entire Caribbean by voicing that he receives the Nobel Prize on their behalf, and not solely on his. Does further heightens the experience for the viewer when she pans out to a scene depicting a Trinidadian field where a dramatic version of the great Hindu epic, The Ramayana, is being performed, thus nodding towards the opening of the lecture. Walcott articulates eloquently that The Iliad and The Odyssey are two Asian epics like The Ramayana. A masked actor portraying the ten-headed demon king Ravana and a massive statue of his giant brother Kumbhakarna, which is burned in effigy in the documentary, further dramatizes Does’s point. She also lifts a phrase from the lecture, using it as her title, Poetry Is an Island.

[. . .] One of the most revealing scenes has Walcott, fellow poet and 1995 Nobel Laureate Seamus Heaney, his wife Marie Devlin, and West Indian novelist Robert Antoni all congregated at the Roseau Valley Church to see the exquisite mural painted by Dunstan St. Omer (Gregorias), which serves the church as altarpiece. Not long after the filming of the documentary Heaney, regrettably, passed away; St. Omer, Walcott’s childhood friend, an artist of great power and originality, also passed. In Does’s film we see two of the 20th-century’s leading poets together for the last time, talking about life, death, and how art reconciles the two. This is a gift beyond words.

Sharif El Gammal-Ortiz is a poet and translator from Carolina, Puerto Rico. His poetry has been featured in The Acentos Review, The Atlas Review, What I Am Not a Painter, Entasis Journal, SAND, and others.