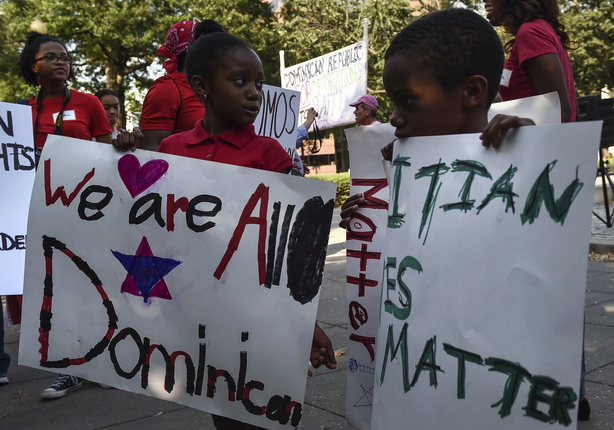 AFTER MONTHS of bluster and confusion , Dominican Republic authorities for now seem to have quietly backed away from their ill-advised threat to expel more than 200,000 Haitian migrant workers and, quite possibly, tens of thousands more of Haitian ancestry, including children born in the Dominican Republican who have never laid eyes on Haiti.

That’s good news, but it’s not the end of the story. For while the immediate danger of a humanitarian and human rights calamity may have passed, in its wake is an administrative mess that has cast doubt on the citizenship and legal status of large numbers of Dominicans of Haitian descent.

The Dominican Republic and its destitute neighbor, Haiti, share a 230-mile border on the Caribbean island of Hispaniola and a history of mutually antagonistic relations. Although far from a wealthy country, the Dominican Republic has for many years attracted immigrants and migrants from Haiti, which is among the world’s poorest nations.

A 2013 Dominican court ruling stripped tens of thousands of ethnic Haitians born in the Dominican Republic of their citizenship — even those born to undocumented parents as far back as 1929. At a stroke, the ruling meant that people who knew nothing of Haiti or its predominant language, Creole, were now stateless after living their entire lives as Dominicans and speaking only Spanish.

After an international outcry, the Dominican government softened the effect of the court’s ruling by allowing Dominican-born children of Haitian ancestry to apply for citizenship — if they could produce the requisite paperwork, which many could not. Other ethnic Haitians were also given a chance to “regularize” their status, but only 290,000 of some 450,000 people eligible did so by a deadline in mid-June.

As the deadline passed, fear spread among ethnic Haitians, fueled by explicit threats by Dominican officials that mass expulsions would start this summer. Quiet diplomacy by the United States, among others, seems to have prompted Dominican officials to reconsider the consequences of carrying out what the world would regard as an act of ethnic cleansing.

Even with the deportation threats in abeyance, there is widespread bureaucratic confusion about whose paperwork confers which status. In theory, the 2014 Naturalization Law established a framework for tens of thousands of ethnic Haitians to register with the state and regain the citizenship that many assumed they already had. In practice, the process has been bedeviled by requirements ranging from the arbitrary to the incomprehensible. Critical documents have been routinely denied to people who, in effect, are now stateless.

The effect is to deprive many thousands of ethnic Haitians full citizenship, meaning their children cannot be registered with the state at birth or enrolled at school. Many others have been compelled to register as foreigners with the vague promise that they would be naturalized — eventually. The process for registering with the government — multiple witnesses, hard-to-procure documents — seems almost intentionally bewildering.

The Dominican government needs to formally rescind the threat of mass deportations and streamline the process to restore the rights of people stripped of their nationality and living in administrative limbo. Only then will the damage of the past months’ upheaval start to be undone.

Read more on this issue:

The Post’s View: The Dominican Republic’s discrimination against Haitians