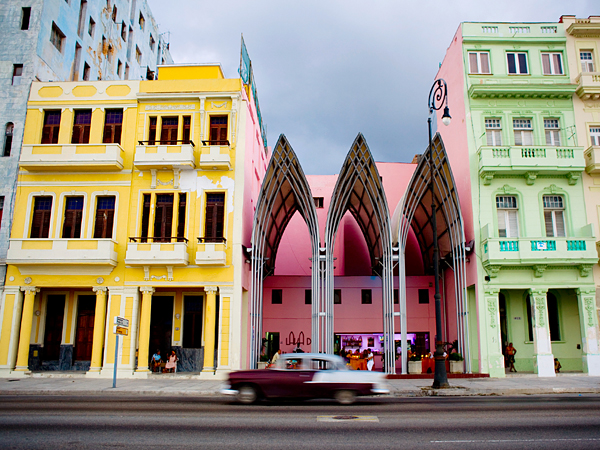 National Geographic (Travel) recently published an excerpt from a book by Keith Bellows, 100 Places That Can Change Your Child’s Life. Here are excerpts of the excerpt titled “Havana: Afro-Cuban Culture.”

To get an inside glimpse of daily life for the average Cuban, you and your kids should skip the hotels and stay in one of the hundreds of casas particulares sprinkled throughout Havana, the Cuban equivalent of B&Bs and one of the few forms of private enterprise permitted by the country’s socialist government.

Besides costing a fraction of a hotel, staying inside the home of a Cuban family puts your family in the middle of a residential neighborhood, where you will awake to the sounds of daily life—street vendors calling out pregones to advertise their wares, children playing ball in the street, and salsa music blasting from open windows. “Staying with a family was critical to get the cultural rhythms,” says Mark Goehring, father of two who visited Havana with his children. “The kids got to see the day-to-day life and practice some of their Spanish with people who really cared for them.” [. . .]

Live like a Havanan outside the home by visiting the places Cubans take their own kids, like the Coppelia ice cream parlor; El Cinecito, a movie theater that exclusively screens films for kids; or La Colmenita, a children’s theater company housed in the Teatro Nacional.

Stroll the streets of Old Havana, and you will inevitably encounter strains of son—the old style of Cuban music made famous by the group Buena Vista Social Club—wafting down the colonial streets from bars and cafés where live bands play. Music is at the heart of Cuba’s culture, and Cuba’s African heritage is at the core of its music. Unlike in North America, where drumming was often banned in slave communities, “in Cuba, the conditions existed for an explicitly African culture to flourish into the present day,” notes Ned Sublette, author of Cuba and Its Music (2004). “Maybe one of the most important lessons Cuba can teach a visiting child from the United States is the same lesson it can teach adults: the richness of Afro-Cuban culture. In Cuba one quickly sees that there are other modes of black-white social relations than the ones North Americans have internalized.”

The best place to get an authentic taste of Afro-Cuban culture is at the weekly Sábado de Rumba (rumba Saturday) held in the shady patio of El Gran Palenque, home of the Conjunto Folklórico Nacional, the national folklore ensemble founded by the Cuban state in 1962. The show starts with a performance of the more traditional Afro-Cuban music and dance styles associated with Santeria, and ends with a high-energy rumba that gets foreigners and Cubans alike up and dancing. [. . .] Music is a way to end any day in Havana, so as the sun sets, stroll along the Malecón, the seaside walkway—there guitar-bearing troubadours will serenade you and your kids for a tip.

Know Before You Go

Insider Tip: The Callejón de Hamel (callejón means “alleyway”) is equally famous for its colorful murals as it is for its Sunday afternoon rumba—the quintessentially Cuban style of drumming and dancing born out of the fusion of Spanish and African roots. [. . .] For a more pleasant experience, wander through the colorful passage on a weekday. Painted by neighborhood resident Salvador González, the funky alley is an open-air art installation paying homage to Afro-Cuban culture and religion.

Books for Parents: Cuba: After the Revolution by Bernard Wolf (1999): This photo essay presents a glimpse of daily life in contemporary Cuba, focusing on 12-year-old Havana resident Ana Moreira and her family. The accompanying narrative gives an overview of the politics, economics, diversity, and social history of Cuba.

Movies: Viva Cuba (2007): This independent Cuban film tells the story of two children, best friends Malú and Jorgito. When they learn that Malú’s mother plans to leave Cuba and take Malú with her, the two run away together to the eastern side of the island. Winner of the Junior Prize at the Cannes Film Festival, Viva Cuba explores the issue of emigration from the literal point of view of the country’s children.

Music: Cuba by Putumayo Presents: Various Artists (1999): This compilation brings together a sampling of son, a soulful, energetic genre that was the precursor to salsa. Featuring stars such as Ibrahim Ferrer and Irakere, this album will get you moving to a Cuban beat. Rumba Caliente 88/77 by Los Muñequitos de Matanzas (1999): Arguably the best rumba group to come out of Cuba, Los Muñequitos de Matanzas has been around since 1952 and still tours internationally. The group has been instrumental in the preservation of Afro-Cuban traditions, and received a Grammy Award nomination in 2001.

[Photo above: A vintage car passes a modern bar nestled between neoclassical buildings in Havana, Cuba. Photograph by Natalie Grono, Getty Images; included in the original article. See link below.]

For information on the book by Keith Bellows, see http://shop.nationalgeographic.com/ngs/browse/productDetail.jsp?productId=6200859&code=NG25172