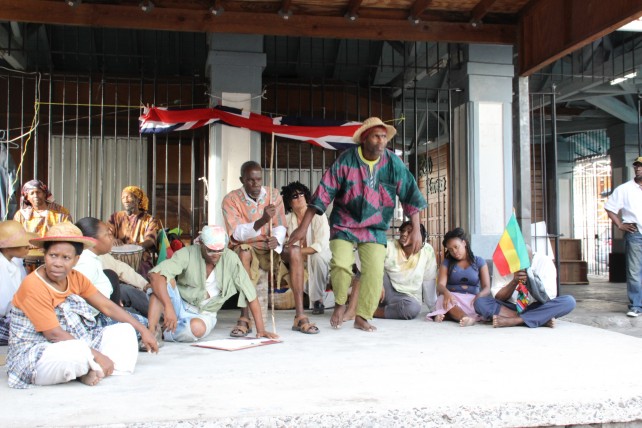 A large crowd of Dominicans gathered at the Old Market Place in Roseau on Sunday to join the celebration of honoring the Maroons who courageously fought to undermine and destroy the institution of the slavery on the island, Dominica News Online reports. Follow the link below for a gallery of photos.

The activity, dubbed “A Tribute to Jacko” was organized by the 12th of July Movement, to commemorate the valiant Maroon Chief “Jacko” who was killed on July 12th, 1814 and who was considered the most important maroon chief in Dominica.

“These very stones that you see here is some way sanctified by the blood of the innocents, by the blood of those people who had the courage to stand up against wrong, to stand up against slavery, to stand for injustice, to stand for liberty, to stand for human dignity,” Founder of the 12th of July Movement, Attorney at- Law, Bernard Wiltshire said while addressing the opening ceremony. “And they paid the price, and they paid the price with their blood and their blood was spilled on this very stones, in this very place.”

He said therefore the ceremony has symbolic significance and “we” can give it meaning.

He indicated that because of the struggle which took place in the Old Market, the area can now be transformed from a place of desolation, to a transcendent place.

“We can give it a meaning that in fact confirm, not the defeat of our people attempt to get freedom, but in fact its triumph,” he explained

Meantime, Wiltshire called for the Old Market Place to be transformed into a National Heroes’ Park.

“We want this square to be a National Heroes’ Park at the back there,” he noted. “Instead of having the statue of the Maroon there, those people we regard as our heroes, the people who fought for our freedom, we will have statues around the square, this very place where they suffered and were executed and were murdered. Their memory will stand in triumph, that will show the victory of good over evil, the victory of triumph over disaster.”

The event began with libation and drumming, followed by a moment of outrage, poetry power talks, chanting and the production of a short play called “Your Time Is Done Now” directed by Alwin Bully and written by Polly Pattullo which presented the original evidence from the Maroon trials of 1814.

For the original report go to http://dominicanewsonline.com/news/homepage/news/general/dominicans-honor-maroon-ancestors/