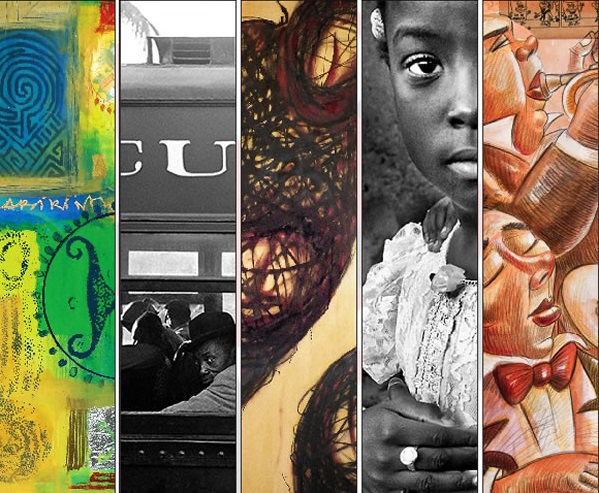 This article by Fallan Patterson appeared in The Sun-Sentinel.

Elisa Lejuez scours the northern beaches of Aruba for natural material for her artwork. She tries to beat the beach cleaners poised to clear the sand of driftwood, rocks and other material before tourists arrive.

Lejuez created a series of pieces inspired by her native land’s cave paintings, which she toured and photographed before creating silk screen printings and combining them with healing stones, driftwood and rocks.

“They were very inspiring to me,” she said of the caves.

Lejuez’s artwork is on display in “Caribbean Colorful Diversity,” an exhibition celebrating Caribbean American Heritage Month and running through Aug. 28 in the Ansin Family Art Gallery at the Miramar Cultural Center.

“This is one of the loveliest art exhibits I’ve seen,” said Valerie Gammon, the center’s director of cultural affairs. “It really captured me.”

“I combine it with the paint,” the Miami-based artist said. “I’m also taking food that is bad for you and making it beautiful. My artwork is very much about chaos.”

His series is also about the metaphysical, godliness and conflicting views on them. He helps viewers explore them with titles taken from footnotes, with page number and author included.

“Without the title, the viewer would have to get something they interpret,” he said. “With the title, it helps you make connections I want you to make.”

Each piece includes human arms and legs in some fashion.

“I have to incorporate the human form in there because we carry (godliness),” Saint-Val said. “I use a lot of women legs because metaphysically, the male does not exist. Think of Mother Earth.”

Cuban-born artist Ana Amada Ferrer left New York City for a more natural setting. She ended up just outside of Woodstock, where she found a cocoon.

Inspired by the confining space freeing a butterfly, Ferrer stayed in the area for two months creating her cocoon series out of torched wood, acrylics and pastel paint. Three of the 10-piece series are on display in Miramar.

“This came with being fed up with New York and phones and the Internet,” she said. “Sometimes you’re just craving nature.”

Meet the artists
Luis Castañeda representing Cuba
Castañeda is an internationally acclaimed photographer. Born in Havana, Cuba in 1943, he has served as the official photographer for Ballet Nacional de Cuba, Teatro Musical de La Habana, and for the Ministry of Culture. His mastery of the camera has led camera manufacturers, such as Panasonic, Leica, Minox and Hasselblad use his photographs to illustrate their publications and advertise their products.  His  photographic articles have been published in Leica Fotografie Intl (Germany), Leica Magazine (Italy), Popular Photography (P.R. of China), Foto & Video (Russia) and Photoworld (P.R. of China).  His work is represented by several prestigious Stock Agencies in the world, like Getty Images (The Image Bank) (USA), Tips Images (Italy), Alamy (U.K.), AGE Fotostock (Spain), Global Photos (Iceland) and Pix Gallery (Sweden).
Asser Saint-Val representing Haiti
Saint Val is a painter, sculptor and installation artist born in Haiti. His quasi-figurative images, by turns humorous and grotesque, bring together ideas, people and incidents central to modern debates about the definition and
valence of Neuromalanin. Rendered in a blend of traditional art mediums and a wide range of unconventional, organic materials—coffee, chocolate, ginger, tea and chocolate among them—his pictures, objects and environments are a surreal fantasia on such loosely linked themes as under-recognized African American inventors, the politics of sexual desire, and the complex aesthetics, narratives and metaphors that attach to the organic compounds neuromelanin.
Carl Juste – representing Haiti
Juste is a Pulitzer Prize winning Miami Herald photojournalist who was born in Haiti
Juste fled Haiti with his family as a young boy and settled in Miami. Juste has been a staff photojournalist at the Miami Herald for more than 15 years, shooting several thousand domestic and international assignments and deeply touching readers with his dramatic images. His work has been exhibited in galleries and museums worldwide and he has won many prestigious awards. He is the co-founder of the Iris PhotoCollective, a specialized photo agency created by and for communities of color.
Ana Amada Ferrer – representing Cuba
Ferrer is a mixed media artists born in Placetas, Cuba. She is an artist, feminist, and activist. All of these roles, much like the art she creates, represent the colorful tapestry of her personal experiences and observations. Ferrer fled the Communist regime of Fidel Castro as a young child and took refuge in Spain before arriving to the United States in the 60’s. Her unique style was recognize by receiving an award at The Museum of Modern Art, NYC, for freedom of expression in American life sponsored by the Rockefeller Foundation, The Robert Sterling Clark Foundation, The Nathan Cummings Foundation, Andy Warhol Foundation for the Arts.
Elisa Lejuez – representing Aruba
Lejuez is a unique multi-disciplinary/multi-faceted artist that incorporates unusual techniques into her artwork.  She currently resides in Aruba.  She was born in 1973 from a Curacao mother and Dutch father was raised in Nijmegen, the Netherlands.  Her style is characterized by a striking use of color, acrylic paint and the technique of applying self-made screen prints on canvas. One can read her paintings as an “archeology” of layered shapes and patterns that represent her global heritage. She finds her inspiration in the symbolism of everyday life and incorporates images of these multicultural aspects and eclecticism in her work.
Armando Tejuca – representing Cuba
Tejuca is a mixed media artists, born September 29, 1968 in Havana Cuba.
Tejuca’s work is not an escape, but a painstaking search: the search for happiness when there seems to be no hope. There is a complex cultural blend to be heard in nearly every musical style found in the Caribbean. Tejuca’s musicians series announce the arrival of happiness, but one can never truly find the origins of that happiness without tracing back every brush stroke into Tejuca’s pure soul. His artwork pays homage to the Afro-Cuban jazz movement of the late 1940s. Collaborations of bebop innovator Dizzy Gillespie with Cuban percussionist Chano Pozo brought Afro-Cuban rhythms and instruments, most notably the tumbadora and the bongo, into the East Coast jazz scene, when Gillespie visit Cuba in his first trip he was in search of the group IRAKERE group that carries as a founder Chuco Valdes Jr (son of the great Chucho Valdes) live and die  in the Netherlands as founder were as well Sandoval and Paquito de Rivera (three of them living at present in the USA). In the show a peace of ar of Paquito de Rivera will be showing). Early combinations of jazz with Cuban music, were commonly referred to as “Cubop”, short for Cuban bebop. During its first decades, the Afro-Cuban jazz movement was stronger in the United States than in Cuba itself.

For the original report go to http://www.sun-sentinel.com/local/broward/miramar/fl-cn-caribbean-0628-20150625-story.html