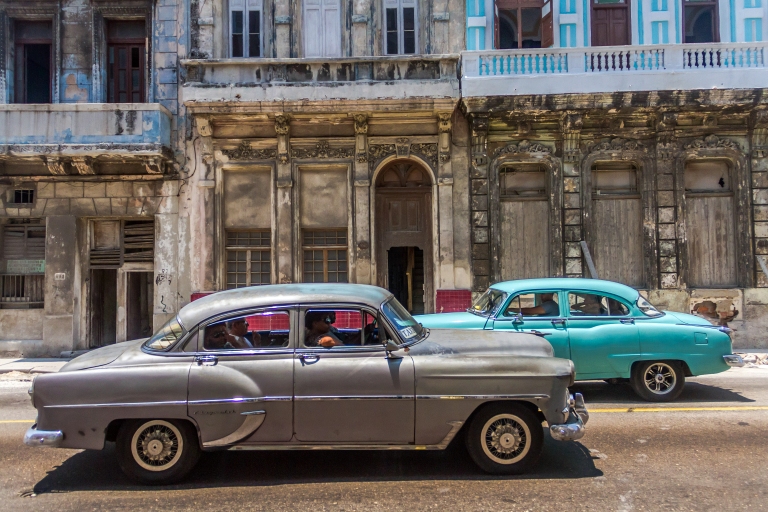 This is an older item (a PBS NewsHour program from June 16, 2015) that I have been meaning to post. On one of the installments of the NewsHour series on the “Cuban Evolution,” Jeffrey Brown explores Havana’s architecture and interviews official city historian Dr. Eusebio Leal Spengler, among others:

JEFFREY BROWN: It is a city of rare visual depth, layers of history told in its buildings, a melding of styles through hundreds of years, Spanish Colonial to mid-20th century Modernism. Today, after decades of neglect and a severe lack of resources, so much of it is crumbling. It’s often said that Havana has been frozen in time, and being here, that feels right. I have never seen anything quite like this before. But everyone agrees that changes are now coming to the city, and that means big new challenges and decisions ahead. The man credited with preserving large chunks of Havana and saving hundreds of its buildings is Eusebio Leal.  What do you see when you walk these streets?

EUSEBIO LEAL, Havana City Historian (through translator): I remember what I saw before renovation. Everything was ruined. It was abandoned. [. . .] Havana is a city like a small Paris. And like Paris, Havana has an identity of its own. We need to preserve the identity of Havana, much the way they have done in Paris.

JEFFREY BROWN: Leal hatched a plan decades ago, and then got Cuban leaders to sign on, to fix up and restore a handful of buildings in Old Havana and funnel part of the proceeds, more than $100 million a year now, back into other buildings, using tourism, in effect, to beautify and maintain the city. Of course, part of the city is still ruined, right, still falling apart?

EUSEBIO LEAL (through translator): Yes, but it’s there, it’s still there, and that’s what is important.

JEFFREY BROWN: Only in the last five years have Cubans been legally allowed to buy a property, and few can afford such a luxury. That’s meant little incentive or resources for updating homes. Many people live in buildings without plumbing or electricity. [. . .]

JEFFREY BROWN: One key, says Mary Jablonski, a conservator on the tour who teaches at Columbia University, is fitting new building, even chain stores, into the character of the place, using appropriate materials.

MARY JABLONSKI, Columbia University: It’s very easy to make mistakes, and if you’re too aggressive in what you repair, you can actually make it worse. [. . .] Yes. If you are doing a repair with the wrong material, it will actually accelerate the deterioration, and that’s a huge concern. Not every building can be saved. I mean, that’s a dream. That’s not going to happen. But let’s say you got 70 percent saved. There’s still room to put in things like Home Depots.

JEFFREY BROWN: City historian Eusebio Leal told me he welcomes the new opening between Cuba and the U.S. He thinks, done properly, development of his beloved city can be done in a way that works for everyone. But there’s a long road ahead. If I come here in five years, or 10 years, 20 years, will I see Starbucks, will I see McDonald’s, will I see brands from, as I would in any other city?

JEFFREY BROWN: But will some neighborhoods of the city have to be torn down and new development and new buildings brought in?

EUSEBIO LEAL (through translator): For sure, there are places that need a complete renovation, a total change. But we will need to keep the character of Havana. People say to me, you have saved Havana. And I have not saved Havana. I have done a little bit of what needs to be done. And people say to me, what would you need to make it happen? And I would need another life, perhaps a third life, to get done what needs to happen.