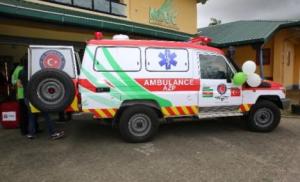 The Turkish International Cooperation and Coordination Agency (TIKA) has donated medical equipment and healthcare supplies— including cots, incubators, and bedside monitors—to Suriname. The Suriname ministry of health was also provided with an ambulance, according to a press statement from Ankara, Turkey.

At the last Caribbean Community (CARICOM)-Turkey consultation and cooperation mechanism meeting of foreign ministers in July 2014, both sides agreed to strengthen existing fields of cooperation and to explore new areas. CARICOM expressed its appreciation for Turkey’s contributions to the CARICOM Development Fund, its active involvement in the development cooperation in the Caribbean and projects carried out by TIKA, which has sent technical delegations to the region in the fields of education, health, disaster management and capacity building.

The former Turkish foreign minister, and now prime minister Ahmet Davutoglu, has promised to open a TIKA coordination office in the Caribbean.