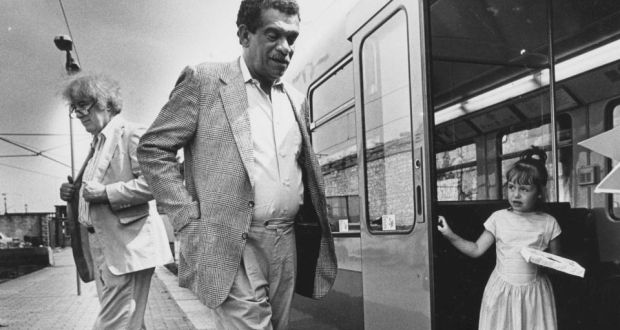 On June 3, 2015, the Griffin Trust For Excellence in Poetry announced that it was honouring Nobel Prize-winning poet and playwright Derek Walcott with its Lifetime Recognition Award. Mr. Walcott is expected in Toronto on June 4, 2015 to accept his award.

Derek Alton Walcott, OBE OCC, winner of the 1992 Nobel Prize in Literature, was born in 1930 in Castries Saint Lucia. Walcott is a poet and playwright noted for works that explore the Caribbean cultural experience.

Walcott was educated at St. Mary’s College in Saint Lucia and at the University of the West Indies in Jamaica. He began writing poetry at an early age, taught at schools in Saint Lucia and Grenada and contributed articles and reviews to periodicals in Trinidad and Jamaica. Productions of his plays began in Saint Lucia in 1950.

With a scholarship he studied at the University of the West Indies in Kingston, Jamaica then moved to Trinidad in 1953, becoming a critic, teacher and journalist. Walcott founded the Trinidad theatre Workshop in 1959 and remains active with its Board of Directors.

Exploring the Caribbean and its history in a colonialist and post-colonialist context, his collection In a Green Night: Poems 1948-1960 (1962) saw him gain an international public profile. He founded the Boston Playwrights’ Theatre at Boston University in 1981. Walcott taught literature and writing at Boston University, retiring in 2007. His later collections include Tiepolo’s Hound (2000), The Prodigal (2004) and White Egrets (2010), which was the recipient of the T.S. Eliot Prize.

Walcott was awarded the Nobel Prize in Literature in 1992, the first Caribbean writer to receive the honour. The Nobel committee described his work as “a poetic oeuvre of great luminosity, sustained by an historical vision, the outcome of a multicultural commitment.” In 2009 he began a three-year distinguished scholar-in-residence position at the University of Alberta. In 2010 he became Professor of Poetry at the University of Essex.

In addition to his Nobel Prize, Walcott’s honours include a MacArthur Foundation “genius” award, a Royal Society of Literature Award and, in 1988, the Queen’s Medal for Poetry. He is an honorary member of the American Academy and Institute of Arts and Letters.

For the original report go to http://www.griffinpoetryprize.com/awards-and-poets/lifetime-recognition-award/derek-walcott/#sthash.kuXYVJHe.dpuf