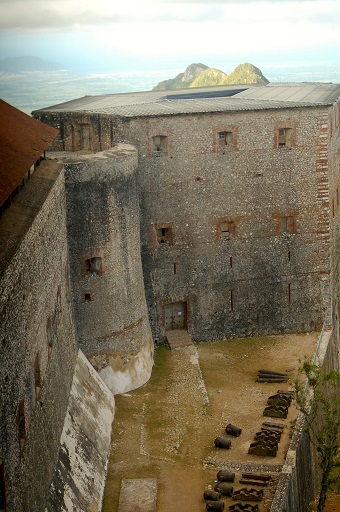 Today, I had my coffee while reading a delightful article by Jamaican poet and educator Opal Palmer Adisa, who writes (for World Unwrapped) about a recent visit to Haiti and its astounding Citadel and Sans Souci Palace. After providing an in-depth description of the massive structures and surrounding area, the author wonders why the Citadel is not part of a required field trip for all Caribbean students and concludes that “a revisionist and more accurate portrayal of Haiti is long overdue.” See excerpts with a link to the full article below. [While you are there, I highly recommend perusing the rest of the World Unwrapped blog. Their mission: “to continually learn about and find beauty in the world.” It is inspiring, to say the least, and well worth a daily visit.]

A popular adage says, “what you don’t know can’t hurt you,” but that’s a lie.  I do believe that what we don’t know in the Caribbean about our own history has crippled us, has stymied our development. The missing history has left us feeling inadequate, not up to par, much less superior or at the least equal to those who enslaved and colonized us and have benefited, in innumerable ways, especially economically, from our four hundred odd years of exploitation.

In all my schooling I was never taught about the Citadel or the Forts or Sans Souci Palace of Haiti. Yes, I did learn that Ayiti was the first country to fight and win its freedom, and in the process burned down the island, but was not told that the newly free African people built what should certainly be among the top seven or more wonders of the world.

On my second trip to Haiti I was determined to visit the Citadel so I took the six-hour drive from Port-au-Prince on wretched roads, most of which are under construction. But the journey to get there was more than worth the aggravation, and seeing the Citadel caused me to tear up.  Why had it taken me more than half of a century to get there?  Why had I not taken my children or myself when I have gone all over the world to see the various wonders? Why isn’t visiting the Citadel part of the required field trip for all Caribbean students?

Built on top of the 3000 foot Bonnet a l’Eveque mountain between 1805 and 1824, it is a massive and impressive structure that reportedly took over 20,000 workers to build, and was the brain child of Henry Christophe, who was then a general in Ayiti’s army, to protect the newly liberated country from French attack. Ideally located, it provides a panoramic view of the ocean, so that any possible invasion (then the sea was the only way in) would be seen. And yet because of its perch behind the mountain, The Citadel could not be seen from the sea, although on a clear day one can sight the eastern side of Cuba, 90 miles west of this structure. I got chills just touring the Citadel and marveled at the tremendous foresight, ingenuity and master builders. [. . .]

Like the Citadel, The Sans-Souci Palace is located in the town of Milot in the city of Cap-Haïtien  and is more accessible. It was the home to King Henri Christophe, his wife Queen Marie-Louise and their two daughters, and reportedly–of the nine palaces that Christophe built–is the most important and the most splendid. As I stood in the original dining-room, I tried to picture this family dining there in 1813 when the construction was completed. [. . .]

For full article, go to http://worldunwrapped.com/the-citadel-and-sans-souci-palace-of-haiti/

[Photographs by the author for World Unwrapped.]