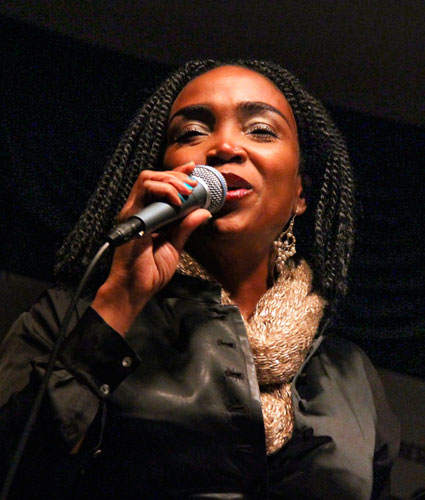 In “Emeline Michel loves to share,” Tequila Minsky writes about Haitian singer Emeline Michel’s many performances in New York (Queens, Manhattan and Brooklyn) during the past month and a half. She recently joined guitarist Marc Ribot to perform songs by Frantz Casseus like “Merci Bon Dieu (Meci Bondyé),” “Adieu Foulard,” “Ti Zwazo” (Little Birds), and “Nan Fon Bwa” (Deep in the Woods). Michel is also getting ready for a one-month “Voice for Peace” trip in Haiti, with Haitian singers Beethova Obas and James Germain, starting April 16.

[. .. ] Whenever she performs, the Haitian-born singer entrances audiences with her mezzo-soprano range–from “deep deep low to falsetto.”

Songstress Emeline Michel likes to collaborate. During this recent flurry of gigs, Michel and guitarist Marc Ribot performed a program devoted to the songs of Haitian composer and guitarist Frantz Casseus.

In a setting more intimate than many other music venues, the evening was part of the Greenwich House Music School “Uncharted” concert series that runs through April. Rachel Black, director of the school, describes the series as an opportunity for musical artists to perform outside of their known genres or to collaborate with artists they’ve never performed with.

Accomplished guitarist Marc Ribot, well known in the downtown music scene (Black says he’s a “guitar god”) started off the evening performing a number of Casseus pieces before Michel joined him on stage. “This is our first dance together,” said the songstress.

Ribot has a long history with Haitian music. When in high school, he studied classical guitar with master musician Casseus who fused European classical tradition with his native Haitian folk elements. In 1993, Ribot recorded the album ‘Marc Ribot Plays Solo Guitar Works of Frantz Casseus’. What symmetry to this program–in a music school, Ribot performed a tribute to his music teacher and during the centennial year of his birth.

She explained in part the meaning of another song, ‘Adieu Foulard,’ “A foulard is the scarf worn by the women in the West Indian colonized countries and the song references when their lovers left returning to their origin countries.” She adds, “The song is part of our historical voice.”

Emeline sang Ti Zwazo (Little Bird); “a children’s song” says the singer. The audience caught on quickly joining her with the refrain, ‘brik kolon brik.’ Like a fairy tale in song with a “dramatic story,” it conjures scary images–the fiyét lalo, female macoutes, who eat little children. “I love this song because it’s part of the country’s musical patrimony,” says Michel.

She also sang Nan Fon Bwa (Deep in the Wood), also known as Yanvalou that alludes to overwhelming nature and its soothing quality.

[. . .] A current exciting Michel/Ribot collaborative project will result in a CD of Casseus songs that they will record later this year. “It’s a way to preserve this music for children (the next generation).”

As for Michel’s schedule, she’s getting ready for a one-month “Voice for Peace” trip in Haiti, which is another creative collaboration. With Haitian singers Beethova Obas and James Germain, Emeline will travel to all parts of Haiti starting April 16 to work with youth. “We’ll be writing and creating songs with them,” she says of the project she has long wanted to do. The United Nations and several cultural organizations in Haiti are sponsoring the project.