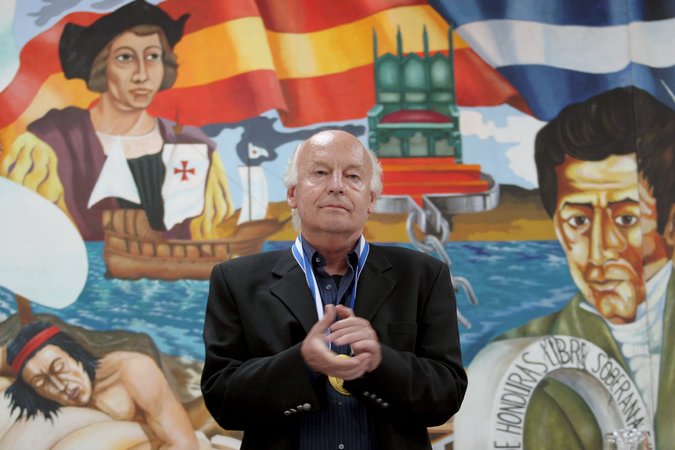 Eduardo Galeano, the Uruguayan writer who blended literature, journalism and political satire in reflecting on the vagaries, injustices and small victories of history, died on Monday in Montevideo,Uruguay. He was 74, as Simon Romero reports in this obituary for the New York Times.

The cause was complications from lung cancer, said his sister Teté Hughes.

Of his more than 30 books Mr. Galeano is remembered chiefly for “The Open Veins of Latin America: Five Centuries of the Pillage of a Continent,” an unsparing critique, published in 1971, of the exploitation of Latin America by European powers and the United States.

Banned under right-wing military dictatorships in Latin America in the 1970s, it became a canonical text of anti-colonialism and anti-capitalism and a much-read underground literary work in parts of the region, much like samizdat publications in the Soviet Union. “Open Veins,” as it is widely called, gained traction again in recent years after Hugo Chávez, the Venezuelan leader who died in 2013, gave a copy to President Obama when they met in 2009. It soon appeared briefly on best-seller lists and has sold more than a million copies worldwide.

But Mr. Galeano stunned many of his supporters on the left as well as his critics on the right when he disavowed the book, saying that it was poorly written and that his views of the human condition had grown more complex.

“I wouldn’t be capable of reading this book again; I’d keel over,” Mr. Galeano said at a book fair in Brazil. “For me, this prose of the traditional left is extremely leaden, and my physique can’t tolerate it.”

Mr. Galeano seemed to regret that “Open Veins” had overshadowed his vast body of other works on subjects ranging from soccer to pre-Columbian history. A former bank teller, sign painter and newspaperman, he was also a caricaturist who often organized his tales around his own illustrations.

Eduardo Germán María Hughes Galeano was born in Montevideo on April 13, 1940, when many in Uruguay, the small cattle-ranching nation sandwiched between Brazil and Argentina, still remembered their leaders forging one of the world’s first welfare states in the early 20th century. His father was a civil servant, and his mother managed a bookstore.

Mr. Galeano began dabbling in journalism as a teenager, sending articles to El Sol, a publication of Uruguay’s Socialist Party, signing them as “Gius,” a pseudonym approximating the pronunciation in Spanish of his paternal surname, Hughes. (His father’s family had Welsh origins.) He adopted his maternal surname, Galeano, when his professional writing career began taking off.

Mr. Galeano was imprisoned in 1973 after a coup d’état opened the way for the rule of a military junta in Uruguay. Mr. Galeano went into exile in Argentina, where he founded Crisis, a cultural and political magazine. He moved to Spain in 1976, when a coup in Argentina triggered an exceptionally brutal dictatorship that lasted until 1983.

Returning to Uruguay when democracy was re-established in 1985, Mr. Galeano helped found another leftist weekly magazine, Brecha. Around that time he produced “Memory of Fire,” a trilogy about Latin American history.

His writing by then had acquired a new lyricism reflecting his honing of an innovative technique combining philosophical musings with autobiographical vignettes. But he remained passionate about history. In one book, “Soccer in Sun and Shadow” (1995), about soccer’s global reach, he chronicled the Soccer War, a conflict between El Salvador and Honduras that coincided with rioting that erupted in 1969 around the time of a qualifying round for the 1970 World Cup.

“The lords of land and war did not lose a drop of blood, while two barefoot peoples avenged their identical misfortunes by killing each other with abandon,” he wrote.

Mr. Galeano remained a prominent voice on the left in Latin America as his work resonated with new generations of writers and artists. Last year, the Puerto Rican hip-hop duo Calle 13 released a digitized rendering of Mr. Galeano reading from his story “The Trip” as part of their album “Multi_Viral.”

Mr. Galeano is survived by his wife, Helena Villagra, and three children. Two previous marriages ended in divorce. Even as his writing grew more experimental, Mr. Galeano credited his fascination with interpreting history to his origins in journalism. “I think every written message forms part of literature, even the graffiti on the walls,” Mr. Galeano told the Spanish newspaper El País in 2010.

“I’ve been writing more books than articles for some time now, but I trained as a journalist, and that factory stamp is still on me,” he added. “I thank journalism for keeping me from contemplating the labyrinths of my own bellybutton.”

For the original report go to http://www.nytimes.com/2015/04/14/books/eduardo-galeano-uruguayan-voice-of-anti-capitalism-is-dead-at-74.html?_r=0