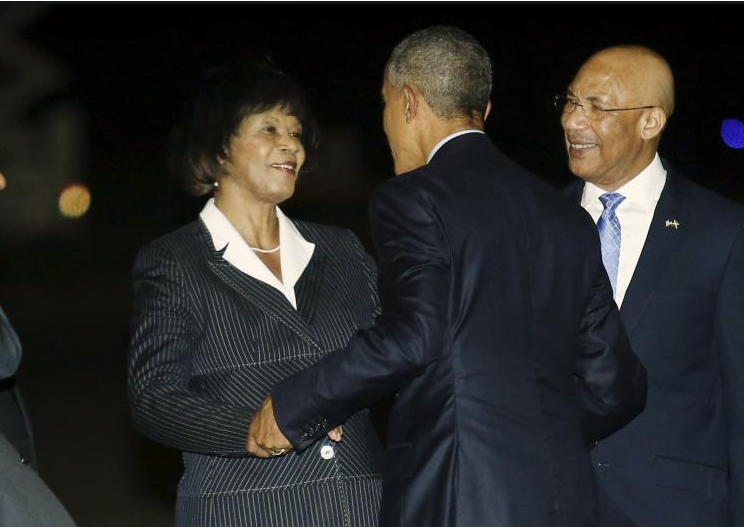 President Barack Obama arrived in Jamaica on Wednesday to attend a Caribbean summit seeking to reassert U.S. leadership in the region at time when oil-producing Venezuela’s economic clout may be receding, Reuters reports.

As the first U.S. president to visit Kingston since Ronald Reagan in 1982, Obama faces the challenge of convincing Caribbean island leaders that Washington is genuinely re-engaging after a long period of perceived neglect of its smaller, poorer neighbors.

Obama arrived in the middle of Jamaica’s Carnival week but will have little time to take in the revelry during a 24-hour visit expected to be dominated by discussions on energy, security and trade with the 15-member Caribbean Community, or Caricom.

Some analysts say a key reason why Washington is suddenly paying attention to the Caribbean Basin is that it wants to wean the islands off dependence on cut-rate Venezuelan oil that Caracas has long used to wield influence in the region.

“As Petrocaribe is unraveling, the U.S. is taking advantage,” said Michael Shifter, president of the Inter-American Dialogue think tank in Washington. “The Caribbean islands have to look elsewhere for energy.”

From Jamaica, Obama travels to Panama to attend a Western Hemisphere summit, where Venezuelan President Nicolas Maduro has made clear he will confront Obama over new U.S. sanctions.

Obama will also cross paths at the Summit of the Americas with Cuban President Raul Castro for the first time since the two announced a historic opening between their countries in December.

Communist-ruled Cuba will also be on the agenda in Kingston, with leaders largely supportive of U.S. détente with the region’s most populous island nation.

In Thursday’s talks, Obama will try to show that even though he remains preoccupied with crises elsewhere in the world, he is determined to focus on the Caribbean.

“We absolutely feel that the Caricom region does deserve greater attention and engagement from the United States,” Ben Rhodes, Obama’s deputy national security adviser, told reporters. “At times people feel like the United States has not engaged these countries significantly as we should.”

Rhodes said the talks would yield “concrete outcomes” but he declined to provide details on any new regional initiatives.

With Caribbean countries saddled with high unemployment, many are eager for a re-energized U.S. partnership. “We have no jobs here. Jamaican people just want jobs,” said Marie Sherood, 32, a craft vendor on the beach in Kingston.

The night before getting down to work with Caribbean leaders, Obama paid a visit to the Bob Marley Museum in Kingston.

On a tour of the house where the reggae legend lived until his death in 1981, Obama, in shirtsleeves, was shown a trophy room where Marley’s Grammys and platinum records were on display. Meanwhile, Marley’s hit song “One Love” played over the loudspeaker.

“What a wonderful tour,” Obama said as he wrapped up the visit.