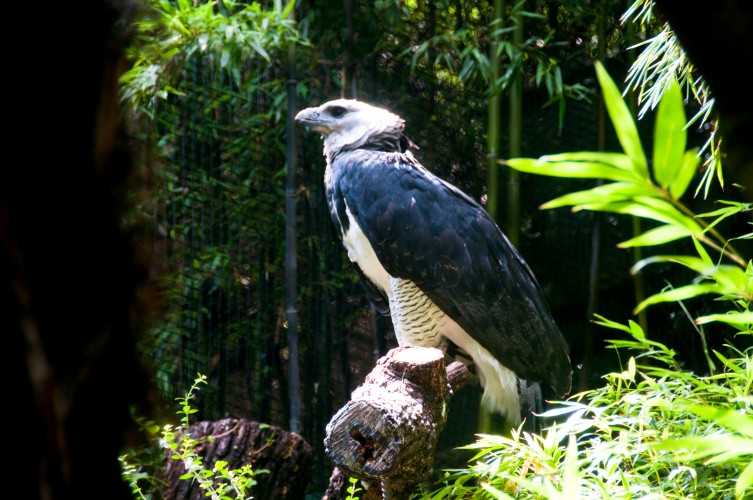 There are more species of birds in Panama than all of North America. NPR’s Scott Simon speaks with Ray Brown, host of the radio program Talkin’ Birds, who just returned from the country. Brown speaks about various bird species and explains that he did not expect to see the harpy eagle (Harpia harpyja, see above), which is critically endangered in Panama. Here are excerpts of the transcript; listen to full story in the link below:

SIMON: Ray, I’ve been to Panama. It’s a very narrow country. How do they fit in so many birds?

BROWN: Well, fortunately they have a lot of forests there, lots of rain forests. So there are big national parks that offer lots of room for lots of birds. In fact, I think about as many species there in Panama as in all of North America, some 900-plus.

SIMON: What are some of the highlights?

BROWN: Well, you know there’s a book that I read years ago called “Life above the Jungle Floor.” This happened to be in Costa Rica, but it was a similar environment. One of the birds that they were seeking and finally found was called the great potoo. I know that sounds like a creature of mystery or maybe one of Johnny Carson’s characters on the old “Tonight Show,” but we finally saw this third.

[. . .] Well, you know, they actually are related to the whippoorwill and these birds are sometimes called goat suckers based on the fact that farmers would see these birds with their – they have large gaping mouths. They’d see them around their barns and they would put two-and-two together and get five, and assume they were sucking milk from their goats. They actually eat insects and bats.

SIMON: But you didn’t, I’m told, see the harpy eagle, which is Panama’s national bird, right?

BROWN: It is, yeah. We didn’t really expect to see it. It’s a bird that not many people see. It’s a very secretive bird in the deep forest, even though it is a gigantic bird. It’s the biggest and most powerful raptor in all of the Americas. In fact, the females can weigh as much as 20 pounds. You can picture that like a Thanksgiving turkey, I guess. The males are only about half that size, but enormous birds. But, unfortunately a lot of habitat destruction has reduced their numbers even more. So they’re described as nearly threatened in much of South America, and in Panama, critically endangered. That name by the way, the Latin name Harpia harpyja, comes from Greek and Roman mythology. Harpies were wind spirits with the body of a bird and the face of a woman.

[. . .] SIMON: Ray Brown is the host of Talkin’ Birds. You can listen to his show from Panama at http://www.talkinbirds.com/.

One thought on “Birder Finds Panama Packed With Species, But No Harpy Eagles”