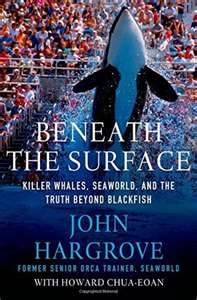 Beneath the Surface: Killer Whales, SeaWorld, and the Truth beyond Blackfish is a revealing new book by former Sea World trainer John Hargrove; it will be on the shelves on March 24, 2015. As commercial descriptions indicate, “Hargrove’s journey is one that humanity has just begun to take—toward the realization that the relationship between the human and animal worlds must be radically rethought.”

Description: John Hargrove’s career as one of the most experienced orca trainers in the world spanned the course of two decades. He worked with 20 different whales, on two different continents, and at two of SeaWorld’s U.S. facilities, where he was promoted to the highest level of trainer and given elite access to the parks’ most dangerous whales. After two of his fellow trainers were killed by orcas in marine parks, Hargrove came to the realization that SeaWorld’s enormously popular and lucrative programs are not only dangerous for trainers, but also physically and psychologically detrimental to the whales themselves on an irreversible level. Truly, this is a shocking exposé of the dark realities of orca captivity, coupled with an intimate portrait of how intelligent and complex these creatures truly are.

Hargrove resigned from SeaWorld in 2012 and is now an advocate for the humane treatment of orcas, having starred in the award-winning documentary, Blackfish. [See previous posts New Film: Gabriela Cowperthwaite’s “Blackfish” and SeaWorld Refutes New Film That Exposes the Cruel Treatment of Captive Whales.] The film brought the issue of orca captivity squarely into the hearts and minds of the American public, and BENEATH THE SURFACE delves deeper into the captive lives of these whales, through the perspective of the men and women who train them. Since orca trainer Dawn Brancheau’s death in 2010, no trainer has been allowed to perform in the water with a killer whale, making Hargrove possibly one of the last of a generation of human beings who have actually swum with orcas. This provides Hargrove with a truly unique vantage point as an on-the-ground expert who spent more than a decade observing and interacting with these dangerous, yet breathtaking animals.

Over the course of two decades, John Hargrove worked with 20 different whales on two continents and at two of SeaWorld’s U.S. facilities. For Hargrove, becoming an orca trainer fulfilled a childhood dream. However, as his experience with the whales deepened, Hargrove came to doubt that their needs could ever be met in captivity. When two fellow trainers were killed by orcas in marine parks, Hargrove decided that SeaWorld’s wildly popular programs were both detrimental to the whales and ultimately unsafe for trainers.

[. . .] In Beneath the Surface, Hargrove paints a compelling portrait of these highly intelligent and social creatures, including his favorite whales Takara and her mother Kasatka, two of the most dominant orcas in SeaWorld. And he includes vibrant descriptions of the lives of orcas in the wild, contrasting their freedom in the ocean with their lives in SeaWorld.