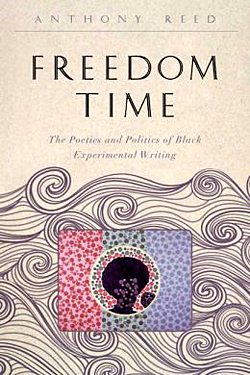 Freedom Time: The Poetics and Politics of Black Experimental Writing

According to the publisher, standard literary criticism tends to either ignore or downplay the unorthodox tradition of black experimental writing that emerged in the wake of protests against colonization and Jim Crow-era segregation. Histories of African American literature likewise have a hard time accounting for the distinctiveness of experimental writing, which is part of a general shift in emphasis among black writers away from appeals for social recognition or raising consciousness. In “Freedom Time” Anthony Reed offers a theoretical reading of “black experimental writing” that presents the term both as a literary development and as a concept for analyzing how writing challenges us to rethink the relationships between race and literary techniques.

Through extended analyses of works by African American and Afro-Caribbean writers — including N. H. Pritchard, Suzan-Lori Parks, NourbeSe Philip, Kamau Brathwaite, Claudia Rankine, Douglas Kearney, Harryette Mullen, and Nathaniel Mackey — Reed develops a new sense of the literary politics of formally innovative writing and the connections between literature and politics since the 1960s.

“Freedom Time” argues that, if literature fundamentally serves the human need for freedom in expression, then readers and critics must see it as more than a mere reflection of the politics of social protest and identity formation. With an approach informed by literary, cultural, African American, and feminist studies, Reed shows how reworking literary materials and conventions liberates writers to push the limits of representation and expression.