Last Saturday, Cuban writer Leonardo Padura presented his new novel, Herejes, in Havana. The new novel is a work “against prejudices” that integrates historical episodes from the Jewish diaspora and Rembrandt’s life and marks the return of his beloved character detective Mario Conde.

“It’s a novel through which I intend to make my readers think, a reflection that must start from a necessity, a proposed communication,” the writer said at the book’s presentation at the National Union of Writers and Artists of Cuba (UNEAC).

More than a year after its launch in Spain and other European countries, Heretics finally appeared in Cuba, with an initial print run of 1,000 copies, which were sold almost entirely at the launch. 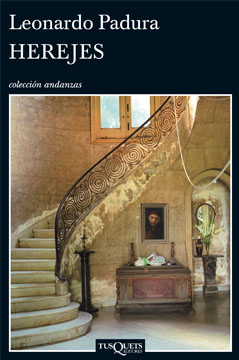 The novel narrates a historical episode from 1939, the abandonment of 937 Jews who left Germany in the SS Saint Louis fleeing the Nazis and on their way to Cuba. Not allowed to disembark, they had to return to Germany.

This historical tale is intertwined with other stories that include the life of Dutch painter Rembrandt, the “forcible conversion to Cuban” of a Polish Jew and the emergence of urban tribe “emos” in Havana. Among them we have the return of his celebrity detective Mario Conde, who becomes “older, more nostalgic and wounded”.

“It is a polyphonic novel, with different narrative voices, different historical moments and characters that do not know who is the protagonist because all of them are,” explained the writer.

During the presentation, the narrator, critic and editor Cuban Marilyn Bobes defined the novel as Padura’s “most ambitious work,” “timeless story of human beings in search of free will.”

Padura (Havana, 1955), a writer, journalist and critic, received Cuba’s National Prize for Literature in 2012 and has achieved international recognition with the series of detective novels featuring detective Mario Conde, translated into numerous languages and deserving of countless awards.

He is also author of The Man Who Loved Dogs, a reconstruction of the lives of Leon Trotsky and Ramon Mercader, which cemented his international reputation.