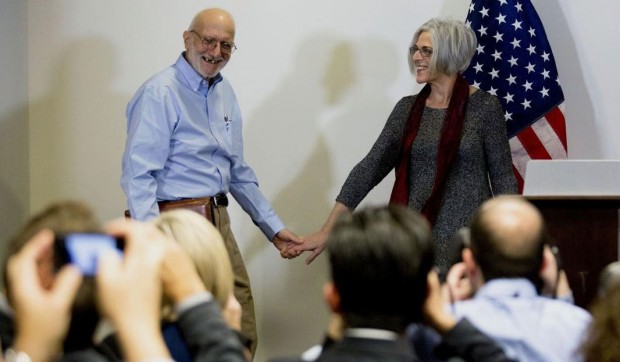 John Stoehr (The Hill) writes about the real story behind Alan Gross’s work in Cuba. Stoehr reminds us that “Television news reporting told the story of Gross as a humanitarian unjustly jailed in 2009 by a repressive Communist regime for the crime of bringing Internet access to Cuba’s small Jewish community.” He dispels misconceptions, confirming that Gross wasn’t “simply” helping ordinary Cubans or the Jewish community, affirming that “any cub reporter could have searched newspaper archives to learn more about Gross” rather than blindly believing the media hype. He underlines that “In Cuba, Gross was part of a USAID program that was funded by the 1996 Helms-Burton Act, which [. . .] explicitly called for overthrow of the Castro regime.” See excerpts here and read full article in the link below:

[. . .] In announcing his administration’s shift in Cuba policy, Obama said Gross “was arrested by Cuban authorities for simply helping ordinary Cubans.” Marco Rubio, the anti-communist Republican senator from Florida, said Gross was innocent of all charges against him and that he’d been “taken hostage” for “helping the Jewish community in Cuba have access to the internet.”

Neither was the case. He wasn’t “simply” helping ordinary Cubans. He wasn’t “taken hostage” and he wasn’t “innocent” of breaking Cuban law. [. . .] But the facts behind Gross’s escapades have been largely known since at least 2012 thanks to the dogged reporting of the Associated Press’s Desmond Butler. At the time of his release, any cub reporter could have searched newspaper archives to learn more about Gross. That his presence at the State of the Union address did not raise an eyebrow in Washington, that he was recognized as a kind of hero in the fight for democracy and justice around the world, speaks volumes to the impotence of our national media and the lengths to which Obama is willing to go to end the still-lingering absurdities of the Cold War.

In 2009, the United States Agency for International Development (USAID) paid Gross, through a third party, almost $600,000 to go to the island nation to install military-grade Internet equipment in Jewish synagogues that could not be detected by the government in Havana. Gross’s company specialized in installing computer electronics in remote areas and had worked in developing countries in Central Asia and Eastern Europe.

In Cuba, Gross was part of a USAID program that was funded by the 1996 Helms-Burton Act, which codified the Kennedy-era Cuban embargo into law and explicitly called for overthrow of the Castro regime. According to the Government Accountability Office (GAO), the United States government has spent more than $200 million since 1996 on so-called “pro-democracy programs” meant to destabilize the Cuban government from the inside.

The GAO report noted that Cuban law forbids citizens from working with “U.S. democracy assistance activities.” Therefore, by necessary, any pro-democracy program could not have been conducted openly. But American law forbids the State Department, which oversees USAID, to engage in covert operations. For this reason, USAID always says its Cuba programs are not “covert” but rather “discreet.” Gross was, however, not discreet enough.

According to reporting by Lou Dubose of The Washington Spectator, Cuban intelligence knew about Alan Gross as early as 2004 when he first delivered illegal networking components to a contact in Havana. That contact turned out to be an undercover Cuban agent well-known to American diplomatic corps but apparently unknown to USAID, an agency ostensibly dedicated to economic development. On his fifth trip to Cuba, in 2009, Gross was detained and later sentenced to 15 years for “criminal acts against the independence of the Cuban nation.”

Gross wasn’t only paid hundreds of thousands of dollars to subvert the Cuban government; he understood that by installing banned Internet networks, he was breaking Cuban law (Havana tightly controls access to the Internet). “This is very risky business in no uncertain terms,” Gross wrote in trip reports reviewed the AP’s Desmond Butler. Gross said: “Detection of satellite signals will be catastrophic.” A Cuban Jew made it “abundantly clear” to him “that we are all ‘playing with fire.'”

Development Assistance Inc. (DAI), the third-party company that subcontracted with Gross, said he remitted regular reports of his activities, and that the entire Cuban escapade was his idea. A spokesman for the Maryland-based company told the Associated Press in a statement that Gross “designed, proposed, and implemented this work” for DAI. Moreover, DAI said that it briefed USAID on everything Gross was doing. It might be noted that the head of USAID, Raj Shah, announced his resignation on the day before news broke of Obama’s shift in Cuba policy.

So the evidence thus far suggests that Gross knew the risks. If so, Gross knew he was endangering American Jews who thought they were helping Cuban Jews when they were in fact unwittingly smuggling, piece by piece, networking components banned by Cuban law. [. . .] Gross also endangered the privileges Jews enjoy under Castro, according to the Spectator. Because it is illegal for Cuban citizens to cooperate with “U.S. democracy assistance activities,” Gross identified himself as a humanitarian, not an agent of the American government. An unnamed congressional aide with knowledge of the Gross affair told the Spectator: “Cuban Jews had access to the [I]nternet for years before Gross started working with them. He used the Jewish community for cover.”

Yet after being arrested, Gross claimed he had no idea that what he was doing was illegal in Cuba, that he had no intention of undermining the government, that the company that hired him, DAI, failed to properly inform him of the risks. At his trial, he said that he was “deeply sorry for being a trusting fool. I was duped. I was used.”

He was also enriched. While Alan Gross was serving his prison sentence, his wife, Judy Gross, sued DAI for $60 million in federal court. The company settled nearly two years ago for an undisclosed sum. Whatever the amount, it’s in addition to $3.2 million that USAID agreed to pay Gross and DAI in November before he was released. [. . .]