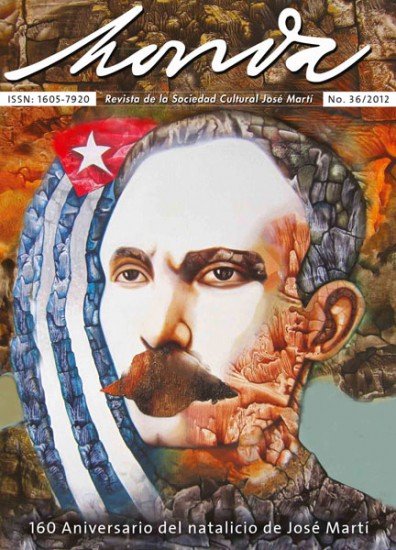 In Cuba, issue 42 of the journal of the José Martí Cultural Society, Honda, was recently dedicated to José Martí (also known as “El Apóstol”) in celebration of his birth on January 28, 1853 (-1895). [Shown above, Issue 36, 2012, celebrating the 160th anniversary of Martí.] Here are excerpts, translated and adapted from Granma:

Coinciding with the birthday of the Apostle, the fourth colloquium of the Marti Square Youth [Jóvenes Plaza Martiana] took place at the José Martí Cultural Society [Sociedad Cultural José Martí (SCJM)] from January 27 to 30. The group presented issue 42 of Honda, dedicated to the Apostle and the 162nd anniversary of his birth.

In attendance were members of the Board and the National Committee of the SCJM and members of Marti organizations, such as Armando Hart Dávalos and Erasmo Lazcano López, president and vice president, respectively, of the José Martí Cultural Society, as well as Dr. Eusebio Leal Spengler, official historian of Havana. Rafael Polanco Brahojos, managing editor of Honda, was also in attendance.

[. . .] In his presentation, historian Eusebio Leal said, “The one who calls us today did not only request in loyalty words; he requested of us the heart and spirit, he asked for thought. As a symbol today, let us offer our heart.”