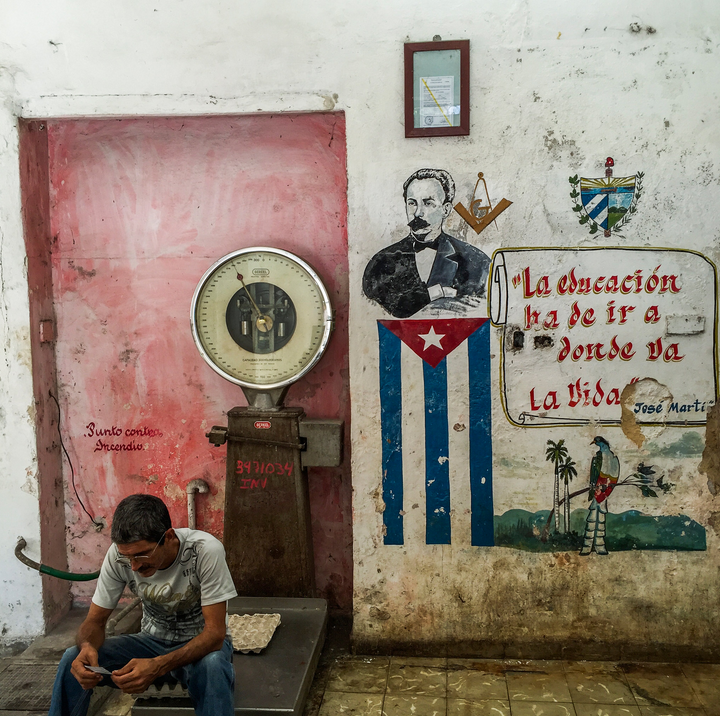 This article by Paul Reyes appeared in The New York Times. It is accompanied by an excellent gallery of photos that you can access through the link below.

Cuba is the idiosyncratic sister of the Caribbean, and a large part of its idiosyncrasy stems from having watched as the last half-century passed it by. What was once a cultural hotbed moldered under Communism. Still, there is an embattled dignity in Havana’s dilapidated architecture, whether colonial style or Art Deco or even the midcentury classics; nowhere else does the traveler find this peculiar marriage between the contemporary and the antiquated, with its incongruous traces of the space age, of Spanish flair and Soviet flotsam. There is, too, a unique resilience among Cubans themselves, whose talent for improvisation, for making do with what’s at hand, is legendary. The feeling of living in frozen time is one of Cuba’s most frustrating realities and its most powerful allure. To imagine Cuba without it evokes an almost existential question.

The specter of a thaw is what motivated me, back in 2009, to press my father — an exile who arrived in the United States in 1962 at age 15, along with his younger brother — to see the island sooner rather than later. For more than 40 years, he refused to send a penny in its direction, either as remittance for his cousins (as it did many others, the revolution fractured our family) or as a tourist himself. That summer, he finally acquiesced, seeking to reconcile with his family and to discover what had become of his country.

Many of us — Cubans, exiles and second-generation Cuban-Americans — admire the anachronistic surfaces while also looking past them to see something else emerging. For years, Cuba has been much more than just jerry-built Chevys with Mitsubishi engines; Audis have been gliding through the streets of Havana for some time; mobile technology is increasingly common. A tourist economy fed by visitors from around the world has fueled a slow-motion modernization. Most of those hailing from the United States have been Cuban-Americans returning to see loved ones, but an increasing number are those with no familial connection to the island, just a fascination with its culture and contraband mystique.

Every time I visit Cuba, even as I come across sights I must have seen a thousand times — the channels of Habana Vieja, the breathtaking vistas of Viñales — I’m compelled to dive back in and work my way through the country. To be clear, this is what you do there: Work your way through it. Leisure left long ago. Instead, the sublime is found in the haggling and hustling and negotiations, in the aesthetic overabundance of color and music and traffic and weather and strays — in a sensuality evident in the pictures on these pages, taken in Havana for The New York Times in December.

Congress is not likely to lift the calcified embargo against Cuba any time soon; but by itself, President Obama’s executive order to normalize diplomatic relations is expected to have a profound effect on how the two countries engage each other, simply by allowing more Americans to immerse themselves in Cuba’s culture. In doing so, the thinking goes, Americans will begin to empower Cubans by doing what tourists do best: hiring drivers, renting rooms, buying meals and souvenirs — spending money. Through these practical transactions, Obama said, American tourists will inevitably do the diplomatic work of sharing their values while “making the lives of ordinary Cubans a little bit easier, more free, more prosperous.”

Actual prosperity is still a long way off, but with an influx of American visitors spending money with fewer restrictions, it seems reasonable to imagine that the Cuban talent for improvisation will evolve beyond just having to make do, to seizing the opportunity at hand.