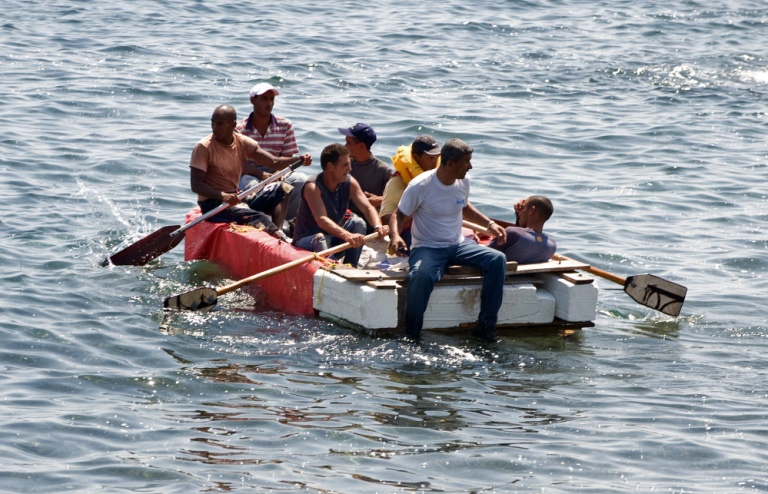 The U.S. diplomatic opening with Cuba has spurred a seemingly unintended consequence: A flood of Cubans taking to makeshift rafts to get to the United States illegally due to concerns that a quick path to legal residency may end, as Dan Lamothe reports for The Washington Post.

The U.S. Coast Guard said Monday that it stopped 481 Cuban migrants in 37 events in December. That’s up 117 percent from December 2013, with most of them attempting to come after the governments in Washington and Havana announced they would renew diplomatic relations for the first time since January 1961.

The Coast Guard sent 121 Cuba migrants it stopped in the last week to Bahia de Cabañas, Cuba, the service said on Monday. In the first five days of 2015, a total of 96 Cuban migrants have been interdicted at sea in seven separate events in the Florida Straits, U.S. officials said.

The surge is prompted by concerns that the United States may end its “wet-foot, dry-foot” policy with Cuban migrants, officials said. The policy says that Cubans who are intercepted at sea trying to get the United States illegally will be sent back to Cuba or a third country, while those who make it to U.S. soil are allowed to stay and apply for a change in immigration status after one year.

“U.S. Coast Guard missions and operations in the Caribbean, Straits of Florida and Gulf of Mexico remain unchanged,” said Rear Adm. Jake Korn, the Coast Guard’s 7th District commander, in a statement. “The Coast Guard strongly discourages attempts to illegally enter the United States by taking to the sea. The Coast Guard is aggressively maintaining a presence in the region and discourages these dangerous and deadly voyages. Individuals must have a visa or other permission to travel to the States and anyone located at sea will be returned to Cuba in accordance with immigration laws.”

Other countries in the region — including Haiti and the Dominican Republic — do not have similar “wet-foot, dry-foot” policies with the United States. Marine Gen. John Kelly, the chief of U.S. Southern Command, said in an interview last month, before the announcement about Cuba, that illegal immigration in the region frequently spikes based on rumors.

The Coast Guard and Navy frequently rescue migrants attempting to flee poverty in countries like Haiti, the general said. Smugglers known as “snakeheads” take money to help them leave the country on rafts, but they are often overcrowded and struggle to stay afloat.

The Coast Guard said it intercepted 3,378 migrants in fiscal year 2014, up from 2,094 the year before. Of those 3,378 migrants, 2,059 came from Cuba. Other leading countries included Haiti (949), the Dominican Republic (293) and Mexico (48), where immigrants sometimes use boats instead of making their way across the U.S.-Mexico land border.

For the original report go to http://www.ticotimes.net/2015/01/06/us-coast-guard-faces-a-new-spike-in-cuban-boat-people