Richard S. Dunn’s A Tale of Two Plantations: Slave Life and Labor in Jamaica and Virginia (Harvard University Press, 2014). HUP writes: “Forty years ago, after publication of his pathbreaking book Sugar and Slaves, Richard Dunn began an intensive investigation of two thousand slaves living on two plantations, one in North America and one in the Caribbean. Digging deeply into the archives, he has reconstructed the individual lives and collective experiences of three generations of slaves on the Mesopotamia sugar estate in Jamaica and the Mount Airy plantation in tidewater Virginia, to understand the starkly different forms slavery could take. Dunn’s stunning achievement is a rich and compelling history of bondage in two very different Atlantic world settings.”

The book was just reviewed by Greg Grandin, professor of history at New York University, for The New York Times. Here are excerpts:

[. . .] The contrasts between the two slave societies were many, covering family life, religious beliefs and labor practices. But one difference overrode all others. In the Caribbean, white masters treated the slaves like “disposable cogs in a machine,” working them to death on sugar plantations and then replacing them with fresh stock from Africa. In the United States, white masters treated their slaves like the machine itself — a breeding machine.

[. . .] In Jamaica, Joseph Foster Barham I and his son Joseph Foster Barham II presided over Mesopotamia during its most profitable decades. Absentee but involved masters, they supervised the plantation’s progress from their homes in England, approving new planting fields, reviewing the amount of sugar boiled and rum distilled, and auditing the ledger books. The one thing they believed they had no control over was life and death. During the seven decades Dunn studies (1762 to 1833, the year Britain abolished slavery), Mesopotamia recorded 420 births and 751 deaths, figures that do not include abortions, miscarriages or, for the most part, stillbirths. At a time of rising production, the data “show twice as many deaths as births, and a high proportion of the slaves who died during these years were children, teenagers or young adults.”

The younger Barham said he took seriously his responsibility to improve the material and moral condition of his slaves. And his agents in Jamaica told him they did everything they could to increase the survival rate of newborns, including lightening the work burdens of expecting women. Nothing helped. As the ratio of deaths to births remained high, slaves themselves were held to blame. “The Negro race,” Barham wrote, “is so averse to labor that without force we have hardly anywhere been able to obtain it.” He is referring to the labor of sugar production. But the sentiment covered white opinions regarding the labor of slave reproduction. Women were punished for miscarrying, sent to the workhouse or to solitary confinement. Yet despite the death rate, the plantation’s population increased, replenished by new captives purchased from slave ships or other Jamaican estates.

In Virginia, John Tayloe III, master of Mount Airy from 1792 to 1828, bred horses and slaves. The horses he raced, earning him the reputation “as the leading Virginia turfman of his generation.” The slaves he worked and sold. “There were,” Dunn counts, “252 recorded slave births and 142 slave deaths at Mount Airy between 1809 and 1828, providing John III with 110 extra slaves.” Tayloe, a fourth-generation enslaver, moved some of these surplus people around his other Virginia holdings and transferred others to his sons. The rest he sold, providing Tayloe with both needed capital and an opportunity to cull unproductive workers, keeping his labor force fit and young.

Tayloe’s son William Henry took over Mount Airy in 1828, and its slave population continued to increase, even as depleted soil led to crop shortfalls and declining profits. So where the Barhams responded to their demographic crisis by buying more slaves and intensifying production, the new master of Mount Airy opted for expansion. He struck out west with his brothers, acquiring cotton fields in Alabama. Between 1833 and 1862, William Henry moved a total of 218 slaves from white-fenced Virginia to the Cotton South’s slave frontier, a distance of 800 miles. Many of these captives were teenagers, “of the right age to learn how to pick cotton.” By this point, with the Atlantic slave trade closed, Virginia had become a net slave exporter; in the early 1800s, there were fewer than a million enslaved people in the United States, mostly concentrated in the coastal and piedmont South. [. . .] 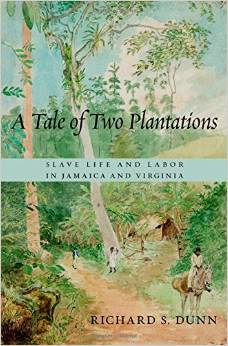 Dunn identifies three reasons Mesopotamia’s slaves couldn’t reproduce themselves: deadly body-wasting diseases, a poor diet and an onerous work regime. He is careful, though, to highlight the brutality of both plantations, especially the casualness with which the Tayloes broke up the families of slaves, either as punishment or to maximize the effectiveness of their labor. Dunn’s prose can be bracing in its understatement: “The extraordinarily large number of deaths,” he writes, “strongly suggests that the managers of Mesopotamia had been overtaxing their workers.”

[. . .] Likewise, Dunn’s discussion of interracial sex seems tone deaf to decades of scholarship on the subject. Forty years ago, Winthrop D. Jordan wrote about the libidinal foundations of white supremacy in America. [. . .] At one point, he calls the relationship between a white overseer, his black “mistress” and his distraught wife a “ménage à trois.” Still, “A Tale of Two Plantations” is a substantial achievement. That it is the product of four decades of exacting research and deliberation comes through in each of its many details.