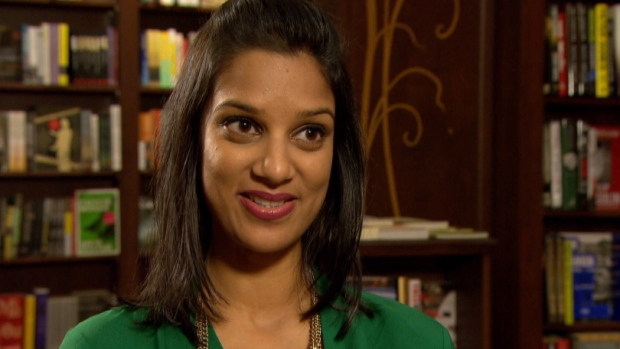 Story ‘is a collection of all the images’ from childhood trips to Trinidad, Ramnanan tells the CBC.

Some of Canada’s most notable novelists have called Toronto home, from Margaret Atwood to Joseph Boyden.

Yet among all of the literary giants and not-yet-known talent gracefully placing words on paper within the city, it has never been more difficult to get a book published — let alone a piece of fiction.

Sabrina Ramnanan, a writer and self-described yogi, has managed to overcome the odds. Her first work of fiction, the novel Nothing Like Love, is set to hit bookstore shelves in April 2015.

The story is set in a tight-knit village in Trinidad, and while Ramnanan says the book is not autobiographical, she did find inspiration from her childhood trips to the Caribbean island.

“This story is a collection of all the images that I’ve saved in my mind from trips to Trinidad — all of the smells, the way the palm trees look when the wind blows,” Ramnanan recently told CBC Toronto in a sit-down interview for our 5 to Watch series.

“And you know what the market looks like and the things that people say. It’s a collaboration of all those memories,” she says.

But perhaps the most incredible part of the story is how the book came to be picked up by publisher Knopf Canada.

Ramnanan wrote the initial elements of the book as part of an online creative writing course she took on evenings and weekends while working as a supply teacher.

She asked Lynn Henry, now the publisher director of Knopf Canada, for her input on the story as part of the requirements of the class.

“I could see immediately that she was incredibly talented,” Henry recalls. “It’s not a usual circumstance where I’m asked to comment on someone’s thesis and then I think, ‘Oh, I should offer her a publishing contract.'”

The publisher only takes on about one or two first-time fiction writers in any given year, Henry says.

‘A dance of impossibility’

Kathryn Kuitenbrouwer, Ramnana’s teacher and a published author herself, says Ramnana’s improbable early success in the tough landscape of Canadian publishing is a reflection of her drive.

“It’s kind of a dance of impossibility from beginning to end,” Kuitenbrouwer told CBC Toronto. “If you want to be a writer in the industry, in the economy of the industry right now, you have to be really diligent and really persistent and really believe in it.”

As for Ramnana, she hasn’t quit her job as a supply teacher just yet. But she’s trying to maintain reasonable expectations for her debut novel.

“I wrote the story and it made me laugh as I wrote it,” she reflects. “I want somebody else to have that same experience with the book — to me that is success.”

For the original report go to http://www.cbc.ca/news/canada/toronto/sabrina-ramnanan-s-debut-novel-set-for-2015-release-1.2882555