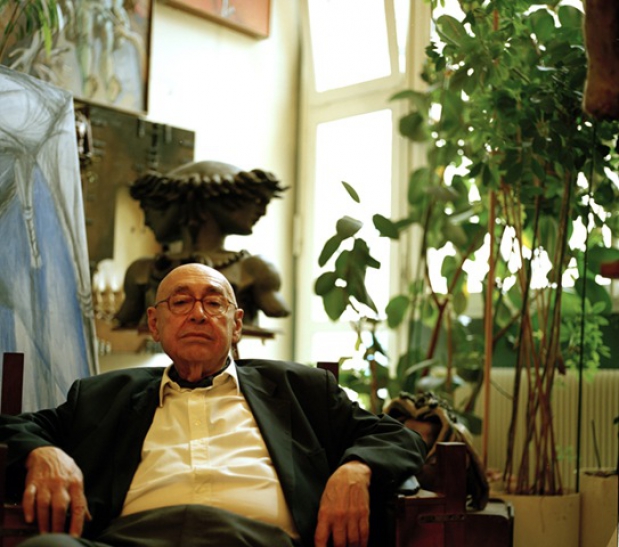 Here is another obituary of the late Ricardo Porro by John Loomis [Many thanks to Dr. Michael Connors for contributing this information]. Ricardo Porro, Cuban architect, died December 25 of heart failure in Paris. He was the leading creator of the most outstanding and controversial architectural achievement of the Cuban Revolution—the Escuelas Nacionales de Arte.

Ricardo Porro Hidalgo was born in 1925 in Camaguey, Cuba. He grew up in the comfort of a provincial bourgeois existence. As a young man he moved to the capitol where he studied architecture at the Universidad de la Habana. There he became acquainted with Fidel Castro who was law school best friend of the brother of Porro’s fiancée Elena Freyre de Andrade. And the three young people shared many a mid-day dinner and boisterous conversation in the Freyre de Andrade household.

After Porro’s graduation he went to Paris. There he became inspired by Cuban painter Wifredo Lam, whose paintings explored cubanidad, Cuba’s multi-cultural heritage, through Afro-Cuban influenced iconography. Lam was also a committed Marxist. Under Lam’s influence Porro now condemned International Style modernism as practiced by Cuba’s prominent architects, and expounded an organic modernism that would more honestly express cubanidad. While a great admirer of Antonin Gaudi and Frank Lloyd Wright, Porro’s organic architecture became uniquely his own. As the 1950s unfolded he progressively adopted a more negrista position, declaring that Cuba deserved “una arquitectura negra.” He had also become a committed Marxist.

And during those same years he became increasingly involved in the clandestine movement against the dictatorship of Fulgencio Batista, often putting himself at great risk. After the failed General Strike of April 1957, his arrest was imminent. Porro and his young wife fled for exile in Venezuela. “I do not fight with guns. I fight with only my words and my architecture,” he explained.

With the triumph of the Revolution, Porro returned to Cuba and brought along two Italian colleagues from Venezuela, Roberto Gottardi and Vittorio Garatti. The three young architects went on to create what would most prominently make their place in history, Las Escuelas Nacionales de Arte, sited on what had been Havana’s most exclusive country club. They agreed on three fundamental principles: respect for the existing verdant landscape, build with terracotta brick and tiles, and for the structure employ the – Catalan vault – which with its potential for plastic form became the formal signature for the Escuelas Nacionales de Arte.

The five schools were conceived in an inspired moment. Porro described it as, “the moment, common to every revolution, during which the marvelous becomes everyday and the Revolution appears – más surrealista que socialista.” In Porro’s two schools, the Escuela de Danza Moderna expressed the ambiguity and violence of the revolutionary moment, and the Escuela de Artes Plasticas expressed most fully the “arquitectura negra” he so longed to delineate in architectural form. But in a short time the art schools and their architects fell from grace and were subjected to attacks. Porro was particularly singled out for abuse by architectural critic Roberto Segre who with inflated Marxist jargon, accused Porro of being an elitist cultural aristocrat, whose work exhibited a “narcissistic and egocentric bourgeois formation”.

But ideology was only a smokescreen. Porro had an enemy in Antonio Quintana, the architect in charge of architectural design for the new Ministry of Construction. Quintana was an unreconstructed modernist who saw the organic expressive forms rising from the country club landscape as unforgiveable architectural heresy and threat. The attacks by Quintana and his subordinates brought construction to a halt in 1965 and the five Catalan vaulted schools lay in various stages of use and abandonment, and until recently with some parts literally overgrown by the jungle.

Castro, who considered the schools to be “la más bella academia de arte de todo el mundo,” met privately with Porro and tried to rectify matters. But the situation was intractable. Castro reluctantly granted Porro’s request for permission to depart. And in 1966 he and his family moved to Paris where Andre Malraux helped him find shelter and work. He rebuilt his architectural practice. Ironically, the major part of Porro’s work serves the working class Communist banlieue of Paris. “I have always been an architect for the workers, immigrants, and the poor” he stated.  In late 1980s Cuba, perestroika and glasost were taking on a cubanidad. By 1996 all was forgiven, and Ricardo Porro was officially invited back to Cuba with much acclaim and celebration, the first of several repeat visits. In Fall of 1999 Fidel Castro declared for the “rehabilitación y completamiento” of the five art schools, a process still slowly moving forward.

In his later years, during an interview with Alma Guillermoprieto, she asked, “What do you consider your greatest achievement?” Porro replied, “I consider my greatest achievement to be the adventure of knowing another person as deeply and as profoundly as I know myself – my wife Elena.”

John Loomis is an architect and professor of interior design at San José State University. He is the author of Revolution of Forms: Cuba’s Forgotten Art Schools, published by Princeton Architectural Press, 2011, and of numerous articles, which have appeared in Design Book Review, where he was executive editor, Casabella, Harvard Design Magazine, Progressive Architecture, Urban Land, San Francisco Chronicle, among others.