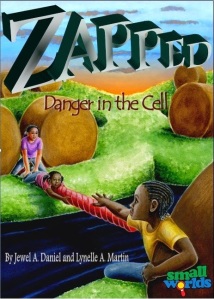 The duo was featured at a launch/book-signing ceremony held yesterday (Dec. 23) at the TDC Mall.

The launch was quite interactive with explanations of how the concept for the book was birthed and an excerpt of it was read by four children along with Lynelle.

The story takes place in a museum in which were four children and the only boy amongst them wonders off and is followed by his friends. He, being a little on the mischievous side, touches something that he ought not to, which results in them being shrunken and zapped into an animal cell.

Before escaping the cell, the four have a number of adventures which includes them being attacked by proteins and acid attempting to dissolve them.

I did not get her involved, she got me involved

In 2009 and Lynelle being only five years old, Daniel published her first book – ‘Marriage of Convenience – and, according to her, Lynelle became very excited having seen it in stores.

She showed interest in wanting to read the book but Daniel indicated to her that it was for adults only and she would not be able to read it until she had reached a specific age.

Lynelle’s ambition went beyond wanting to read the book and she asked her mother to join her in writing one for children. And from there it all began.

Daniel, who holds a PhD in Biology, said cell biology is a difficult concept to grasp and she always took Lynelle to the lab with her and endeavoured to teach her about cells, the way they function and their purpose.

She said she thought it a good idea for the book, especially since it helps children to understand cell biology even at a tender age.

“The science of the book is me, but the adventure, setting etc…that is all Lynelle’s.”

Speaking with the media, Lynelle said she was happy to be involved in the book-writing adventure with her mother, adding that Daniel is her inspiration “because she got me to read and write”.

The book was published by Caribbean Reads Publishing founded by Caron Mitchell, a Kittitian. And also as part of the launch, some of the 22 published books were on display and available for sale.

What’s next for Lynelle and her mother? Zapped is but the beginning and Daniel has informed that the second book in the series has already been completed and the third is being worked on.

For the original report go http://www.sknvibes.com/news/newsdetails.cfm/90195