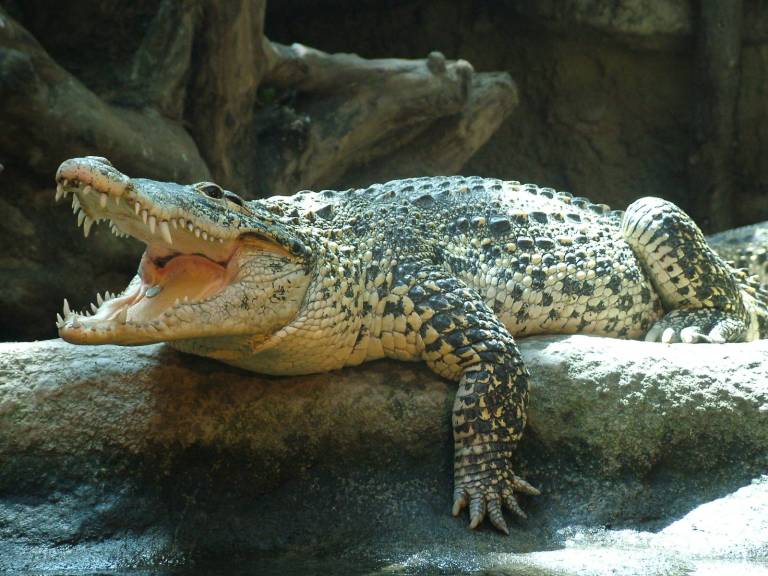 Interbreeding with other species could overwhelm the animal, causing it to go extinct, Allie Wilkinson reports in this article for Scientific American.

One of the world’s most endangered crocodilians, the Cuban crocodile, is facing a genomic identity crisis. The island’s rare, endemic species has been interbreeding with its more abundant cousin, the American crocodile, creating hybrid offspring and posing a threat to its survival. In each baby, a portion of the Cuban crocodile genome is replaced by American crocodile genes. With each subsequent generation, more and more Cuban genes are lost, and eventually the species could go extinct.

Scientists knew the two species were mating with one another in the wild but only recently determined the extent to which this was occurring during a comprehensive assessment of crocodilian genetics in Cuba. The study was published October 22 in Heredity.

A team of Cuban and Canadian researchers, led by Yoamel Milián-García of the University of Havana, analyzed genetic markers from the scale clippings of 227 wild crocodiles and 137 crocodiles from the Zapata Swamp Captive Breeding Farm. The results showed the level of hybridization in the wild is much higher than previously believed—49.1 percent of the wild crocodiles sampled were hybrids, while just 16.1 percent of the captive crocodiles had mixed genes. (In 1974, the captive breeding program decided to keep only Cuban crocodiles, so the American genes in the captives represent an older, lower level of interbreeding.)

Considered critically endangered by the International Union for Conservation of Nature Red List, the Cuban crocodile was once found throughout the island, but extensive hunting from the mid-19th century onward caused the population to plummet. Now the estimated 4,000 remaining individuals are at risk of genetic swamping by the more abundant American crocodile. As more genes from the American crocodile move into the population through hybridization, the Cuban crocodile loses its genetic diversity and what made it distinct. The loss of genes it once carried has the potential to reduce the species’ ability to adapt to environmental challenges it may face. Researchers say the Cuban crocodile’s distinct genetic, morphological, ecological and behavioral characteristics represent a unique lineage–and make it worthy of protecting.

Already the persistent level of hybridization violates the criterion for a species under the biological species concept. This defines a species as group of organisms that can interbreed with one another but are reproductively isolated from other groups.

The next step is to determine whether the hybridization of the two species is a natural phenomenon or not. “We have been seeing it has a natural component and could be enhanced by anthropogenic pressures,” says Milián-García. “But it’s critical for us to determine the magnitude of each component in this process.” Habitat modification and illegal hunting may be driving the two species into the same areas, where they are then able to breed.

The issue is further complicated by evidence that American crocodiles in Cuba are actually more closely related to the Cuban crocodile than to other American crocodiles found on the mainland. It appears that in the Caribbean, American crocodiles took on some genes from their Cuban relatives a little more than two hundred thousand years ago. That implies there are three distinct genetic groups rather than two.

“We don’t know if that’s ancient hybridization or a more complex sort of evolutionary phenomena,” says George Amato, director of the Sackler Institute for Comparative Genomics at the American Museum of Natural History. “But we feel pretty confident that the current observed hybridization is a threat to what we recognize as a distinct species.” Amato was not involved with the recent study but is familiar with the work.

There were some hopeful signs in the genetic analysis of the captive Cuban crocodiles. Approximately 30 percent had a unique subset of genes–DNA they do not share with the rest of the captive population. That makes them valuable reservoirs of Cuban crocodile DNA, and it could be used to help the entire population maintain genetic diversity in the face of the American crocodile onslaught. Researchers plan to use this information to help design Cuba’s first formal attempt at a scientifically informed crocodile management plan.

For the original report go to http://www.scientificamerican.com/article/endangered-cuban-crocodiles-are-losing-their-genetic-identity/

One thought on “Endangered Cuban Crocodiles Are Losing Their Genetic Identity”