Aica Caraïbe du Sud (AICA stands for Association Internationale des critiques d’art) recently posted information on the stunning work of Annabell Guerrero in Martinique. In the exhibition, “Les Pierrotines d’Anabell Guerrero,” the artist presented an exhibition of historic photographs of the women of Saint Pierre (les Pierrotines) as well as an array of photographs from family albums and images selected by city residents. See more information below: 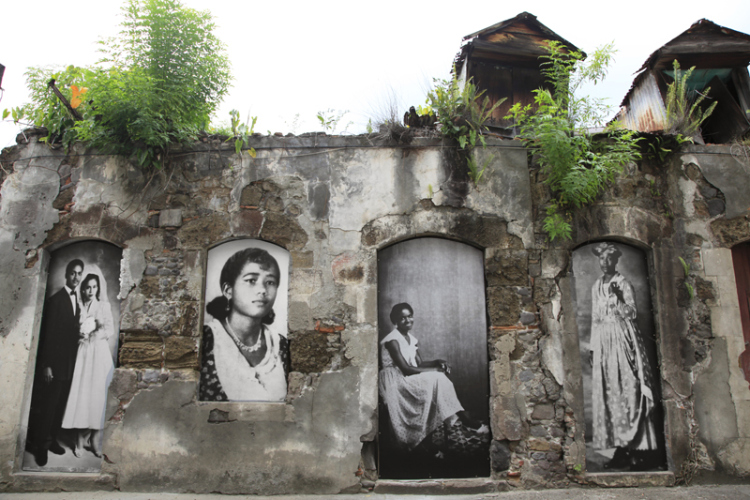 This exhibition of iconic female images or “totems” created by Anabell Guerrero during her artist residency in Saint Pierre is a tribute to the women of Martinique’s former capital, which was destroyed by the eruption of the Mount Pelée volcano on May 8, 1902. The exhibition, “Les Pierrotines d’Anabell Guerrero,” also features an array of photographs from family albums and images selected by city residents during a photographic workshop entitled “Remembrance.” The dual exhibition has been open to the public since Tuesday, October 21 in the downtown center of Saint Pierre.

Anabell Guerrero’s artist residency was conducted in two phases and using two approaches: the creative phase marked by the exhibition of historic photographs of “Les Pierrotines” (“The Women of Saint Pierre”), and a teaching workshop to raise awareness among Saint Pierre residents about creative photography as a tool to examine their lives and history as a way to present both a collective and subjective remembrance of the city.

Les Pierrotines” are reminiscent of the Venezuelan Guajira Indian figures in the 2001 series, “Totems à la frontière” (“Totems at the Border”) exhibited in Fort-de-France in 2008 as well as in Caracas, Puerto Rico, and Biarritz. In a 2006 essay about that photographic suite entitled “Frontières, non limites” (“Borders without Borders”), Edouard Gilissant wrote: “The images of Anabell Guerrero often deconstruct reality and then just as quickly reconstruct it in its glory, in its depth, or in its surroundings near and far. There the human body soon poses and imposes. It takes its place. It enters the composition. It becomes simply a particle of material that nevertheless compels complete attention.”

[. . .] Anabell Guerrero stated that the exhibition “involves working on a representation of the city, the relationship of the residents with the volcano, and the relationship between personal family histories and the collective history. How does the city continue to progress and look towards the future despite a tragic history that saw it completely destroyed? What are the hopes and expectations of the inhabitants? What is their perception of Saint-Pierre (its past, present, and future)? It is fundamental to work through the memories about the volcanic eruption in order to understand life here today. How did the inhabitants come to live in Saint Pierre? After the tragedy, how was the new city reconstituted? There is amidst the ruins of Saint Pierre a connotation that invites us to reflect on those who survived, who for one reason or another were strong enough to not perish with the others….You can feel on the one hand the memory of what happened, but you can also feel a world that was built not just on ruins, but on this spirit of resilience.”

For the full description of both phases of the project and more photos, see http://aica-sc.net/2014/12/01/les-pierrotines-danabell-guerrero/