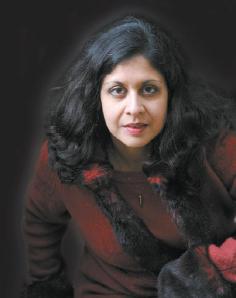 This article by Erline Andrews appeared in Trinidad’s Guardian.

One of the most distinctive things about Vahni Capildeo is her voice. It’s imperious yet slightly breathy at the same time; she puts dramatic emphasis on the syllable at the end of sentences and phrases. It’s easy to imagine that voice reading dark, Victorian-era novels like those of the Bronte sisters. It’s easy to accept that she creates verse that Sunday Arts Section book critic Shivanee Ramlochan describes as “savage, unafraid and hilarious.” Her collection of poetry Dark and Unaccustomed Words—her fourth publication—was long-listed for last year’s Bocas Prize for Caribbean Literature.

And it’s easy to accept that she comes from a vaunted and controversial literary family. She’s second cousin to writers VS and Shiva Naipaul. Her grandfather was the Naipauls’ maternal uncle.
It’s a connection that Capildeo seems ambivalent about, according to readings at an event to celebrate her work, put on recently by the Friends of Mr Biswas, the NGO that maintains the Naipaul House Museum in St James and works to promote local literature.

Nicholas Laughlin, the main organiser of the event, read from Capildeo’s unpublished memoir, in which she wrote about the hard-covered first editions of Naipaul books kept on shelves in her childhood home. “I kept away from all these armoured books. They were impenetrable,” wrote Capildeo, whose grandfather was Simbhoonath Capildeo. He and his brother Rudranath Capildeo were influential in the early politics of T&T. “They were a source of contention, not of pride,” Vahni Capildeo wrote of the Naipaul books, “for our paternal grandfather hated the Naipauls. Who were they, after all? Ungrateful, lesser members of his extended family who had got away with spreading lies and wicked stories about him and his family and Indian people and everyone on the island whose independence he had worked for.”

But the relationship between the Naipauls and the Capildeos wasn’t entirely rocky. The first edition books were given to Capildeo’s mother Leila by her brother’s wife, VS’s and Shiva’s sister Sati.
Leila Capildeo also used to spend time as a girl at Naipaul House—the basis for the legendary VS Naipaul novel A House for Mr Biswas. The Naipauls moved there in 1946. “Leila had fond recollections of their conversation, coffee, bread and cheese, and warmth,” Capildeo wrote of the Naipauls.

Capildeo said the paperback Naipaul books she eventually came across in her house made the Naipauls’ work more approachable. Published by the British company Penguin, they “really looked like books,” she wrote, and first gave her the idea that she could write for a global audience. “It was a real person who once lived in Trinidad who wrote these books? So it was possible?” she wrote. “But I put that thought aside; it was too big.”

Leila Capildeo drew laughs as she read from a poem from her daughter’s upcoming fifth collection. In it the author battles a barrage of questions about her famous cousin. It gives some insight into what it must be like to be related the Nobel Prize winner. “What about VS Naipaul? “I had 23 first cousins until one, not him, died, and he’s not even one of those.
“Is he your uncle?

“My father’s first cousin. I don’t know how many first cousins my father had. He is dead too.

“What about possible radical feminist and pro-abortion connections for VS Naipaul?

“That is absurd. I thought people suspected him of misogyny.

“Is VS Naipaul a Trinidadian writer, a British writer or an Indian writer?

“Wasn’t VS Naipaul born British anyway? People in Trinidad were all British before Independence. Not everybody automatically changed.

“They would not let it go.”

Capildeo studied English literature and language at Oxford University and has lived mostly in the UK since 1991. But she visits T&T regularly, attending a few editions of the Bocas Literary Festival, including this year’s, where she participated in readings, talks and workshops.

She currently holds the prestigious Judith E Wilson poetry fellowship at Cambridge University. “Vahni’s poetry has won her a reputation as one of the most original, most provoking and strangest—in the best sense—writers of her generation among her peers in T&T and the wider Caribbean,” said Laughlin.

Capildeo is the second Naipaul relative featured in an event held by the Friends of Mr Biswas this year. In April, Neil Bissoonath, VS’s and Leila Capildeo’s nephew, spoke and entertained questions about his life and work at the Naipaul House Museum. He seems more embracing of the Naipaul legacy than Vahni Capildeo. His uncle’s success as a writer, he said, influenced to his own decision to take up the profession.

A number of other Naipaul relatives have been involved in the establishment and development of the museum, including Shiva’s and VS’s sister, Savitri Akal, who donated photographs that are on display at the house. She and son Kiran were at the formal opening of the museum in February. Another son, Ashvin, is treasurer of the Friends of Mr Biswas and has “worked assiduously to bring in memorabilia” for the museum, Friends chair Kenneth Ramchand said in an address during the opening.

Besides the Capildeo and Bissoonath events, the Friends have also hosted a talk on the legacy of newspaper publisher Patrick Chookolingo and readings by author Ian McDonald. “It will be both the family home of the Naipaul-Capildeo clan,” Ramchand said of Naipaul House, “and the centre from which we seek to pass on heritage by nurturing literature and the literary arts in T&T.”