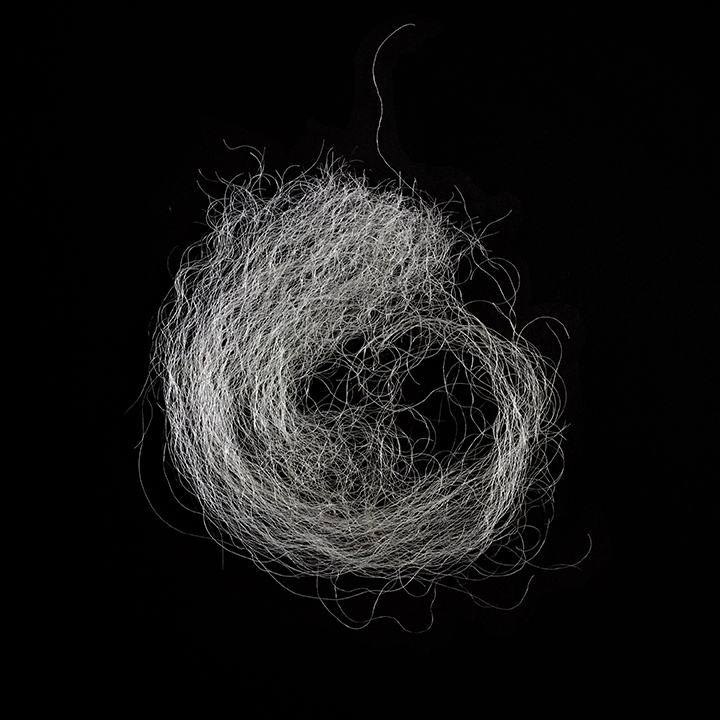 This article by Steven Winn appeared in The San Francisco Chronicle.

Raised in Los Angeles, Lava Thomas spent a lot of time at her grandmother’s beauty salon. “I grew up in that shop,” the Menlo Park multimedia artist recalled recently. “My grandmother cut and styled hair. She also dispensed a lot of wisdom.”

Those two memories are woven into “Braid Scroll,” a 12-foot-long photo-lithograph that uses images of hair as a kind of calligraphy, reminiscent of Chinese and Japanese ink work. In “A Preoccupation With Needles,” Thomas studs a snarl of hair with both knitting needles and one hypodermic syringe. That’s a tribute to her great-grandmother, who was both an avid knitter and a diabetic.

Both of these autobiographically rooted works are included in “Lava Thomas: Beyond,” one of two shows that will inaugurate the expanded and reconfigured gallery spaces at the Museum of the African Diaspora (MoAD). The museum reopens this week after a six-month closure.

The Thomas exhibition shares rechristening honors with “Drapetomania: Grupo Antillano and the Art of Afro-Cuba.” The show’s paintings and sculptures, including a proud but suffering wooden angel streaked with the colors of the Cuban flag, celebrate the art and legacy of an influential group of 1970s and ’80s Caribbean artists. The word “drapetomania,” a bogus scientific term of the mid-19th century, referred to a slave’s compulsion to escape.

Thomas’ art is at once personal and outward-directed. Her various “project-based” endeavors include one on veterans that began on the commute to her studio.

“There was a particular place where I had to make a left-hand turn,” Thomas said, “and there would always be a homeless vet or two there panhandling. You don’t see a lot of that in Menlo Park. You don’t see the underbelly. Silicon Valley is squeaky clean.”

With a commission from the Palo Alto Art Center, Thomas interviewed and videotaped veterans, who opened up to her about jobs, homelessness, suicide and sexual harassment. The portraits of them she subsequently drew addressed her interest in “how a specific shared experience shapes a group’s identity.” A similar project with children, she said, explored “what dreams and aspirations we have when we’re young and how those things change in adulthood.”

For her MoAD show, Thomas is combining early work from the mid-1990s with a new installation piece, the latter in the smaller of the two second-floor galleries. The thematic throughline is what the artist called “the experience of ordinary women who often get ignored, women whose sacrifice and hard work make the success and achievement of their progeny possible.”

Raised by her grandmother and great-aunts, Thomas, whose given first name is Lavynell, followed a similar arc. Enchanted by the art she saw at the Los Angeles County Museum of Art as a child, she remembered thinking, “If there’s a way I can do this, this is what I want to do.” But as a working mother herself, she didn’t have the means to study art until later, first at UCLA and then at the California College of Arts and Crafts (now the California College of the Arts) in Oakland.

The 40 photographic “Cloud Portraits” in Thomas’ installation are both a response to her grandmother’s belief in a transcendent afterlife and what the artist calls “a metaphor for the disembodied time we spend online.” The gallery will also be hung with 100 tambourines, many with blue heads. Whatever their connection to the clouds on the wall may be in the viewer’s eye, they are sure to make a joyful noise in MoAD’s new gallery.

For the original report go to http://www.sfgate.com/art/article/Lava-Thomas-art-rooted-in-biography-5920762.php#photo-7197894