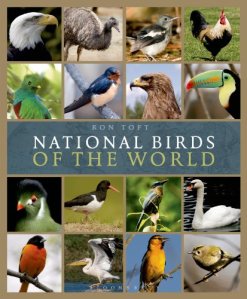 This article by Kurt Repanshek appeared in National Parks Traveler.

The 224-page hardcover book coming out in mid-December covers national birds from Angola (the Red-crested Turaco) to Zimbabwe (the African Fish-eagle), and dozens of countries in between. Heavily illustrated with rich, full-color photographs and illustrations, the book is not geared toward the uber-professional birder, but it does give you a working knowledge of the national birds, many of which are found in their country’s national parks.

Each listing gets a page or two of information that runs down where in the specific country the national bird (official or unofficial) can be seen, its “cultural presence” in the country, and a block with International Union for Conservation of Nature information that notes whether the species is threatened or endangered, its diet and reproductive behavior, range, and habitat.

For example, the Magnificent Frigatebird is the national bird of Antigua and Barbuda. The accompanying photo shows a male with its bulbous red gular sac, or throat sac, inflated to attract a mate.

“These birds are excellent in flight, but their enformous wingspan, short legs and small feet make walking on land appear awkard,” notes Mr. Toft. “The silhouette of a Magnificent Frigatebird is often described as prehistoric.”

The bird can be spotted in Barbuda’s Codrington Lagoon National Park where, the author notes, an estimated 5,000 frigatebirds breed in the Frigate Bird Sancturay found within the park’s borders. As for its cultural presence, the bird long served as a food source for Caribbean fishermen and hunters, and the Magnificent Firgatebird “has adorned many of Antigua and Barbuda’s colourful (postage) stamps over the years, including five in 1994 alone. It has appeared on a highly collectable, limited edition, 23-carat gold-foil 30-dollar banknote.”

Although some listings are sparse — more than a few national birds receive only a page in the book — there are some interesting facts laid out. Of particular note is the national bird of the Republic of Mauritius, an island nation in the Indian Ocean. Its national bird no longer exists: the Dodo.

“The real Dodo is sadly gone, but the image of this, the world’s most famous extinct bird, lives on in Mauritian life as the official national bird of Mauritas,” writes Mr. Toft. “It can be seen on the country’s coat of arms (opposite a Sika Deer), on stamps, and as a head-only three-dimensional watermark on banknotes. A commemorative set of 22-carat gold coins depicting the Dodo has been issued by the Central Bank of Mauritius.”

Though there is no accompanying photo of a Dodo, the author used a puppet of one to illustrate the bird.

Amazon Detail : Product Description
Birds are one of the most popular and visible forms of all wildlife and are inextricably linked with the development of human cultures all around the world. Over the years some of the most eye-catching species of bird have been officially or unofficially adopted by countries as symbols of their national identity; there are now almost 100 national birds spanning every imaginable group from condors to parrots, trogons to frigatebirds.

Both a comprehensive listing and guide book, National BIrds provides a range of information from species data to how these birds have been used and abused through the ages. It recounts tales of how they came to be adopted and presents a wide range of official and cultural contexts where they appear from feathers in tribal costumes to stamps and currency.

For the original report go to http://www.nationalparkstraveler.com/review/2014/national-birds-world25954

One thought on “National Birds Of The World”