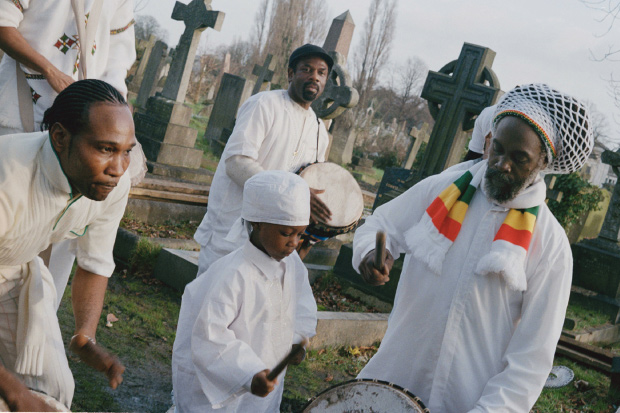 Ian Thomson applauds the grand rituals of West Indian funerals in his review of Charlie Phillips’s How Great Thou Art.

Death is big business in parts of the Caribbean. In the Jamaican capital of Kingston, funeral homes with their plastic white Doric columns and gold-encrusted ‘caskets’ are like a poor man’s dream of heaven. The dwindling belief in an afterlife — the consolation that we might ever join our loved ones — has taken much of the old-time religion out of the West Indian funeral. Wealthier Jamaicans may lavish up to US $30,000 on a Cadillac hearse. Now even death wears bling.

Fortunately, mortuary tradition survives in the Neo-African ‘Nine Night’ ceremony, where for nine nights the body remains in the deceased person’s home or ‘dead yard’ and hymn-singing mourners see to its safe departure to the next world. Charlie Phillips, a Jamaican-born photographer, has spent over half a century shooting Nine Night and other African Caribbean rites in his adopted London. How Great Thou Art, a socially important document, reveals the British West Indian experience of death in all its pathos, occasional comedy and life-affirming sense of the funeral as essentially a fun-for-all. As these photographs show, a person is not considered to be fully dead until his or her spirit (duppy) has been appeased through offerings of drink, food, dance and song, and successful entombment taken place. As they say in Jamaica: ‘No call a man dead til you bury him.’

In Phillips’s moving and often beautiful images, dating from 1962 to the present, the bereaved are seen to face the mystery of the end of life in stush black suits, spidery hat veils, Rastafari head-ties, spiffy trilbies and strictly-come-dancehall white socks. From Brixton to Kensal Rise, Tooting and beyond, death is celebrated as a release from earthly cares as well as an occasion for social display.

British Jamaicans may say of the dying that they are ‘travelling’ — travelling on to a better world. For a super-lively send off, ska or reggae music reverberates from gigantic speaker boxes while mourners drink from bottles of Dragon Stout beer or Styrofoam cups of ‘mannish water’ soup, made of the entrails, testicles and head of a goat. (The risibly awful Rolling Stones album Goat’s Head Soup was part-recorded in Jamaica.)

This photographic collection, judiciously edited by Lizzy King of Brixton’s Photo-fusion Gallery, opens a window on to a world of natty British Caribbean pallbearers, dead-yard domino players and Afro-haired back-to-Africa Revivalist church ministers. Anyone feeling a bit like death in the run-up to Christmas should invest in a copy of How Great Thou Art — and feel revivified.

An exhibition of How Great Thou Art: Fifty Years of African Caribbean Funerals is at the Photofusion Gallery, Brixton until 5 December.

For the original report go to http://www.spectator.co.uk/books/9381902/death-wears-bling-the-glory-of-londons-caribbean-funerals/