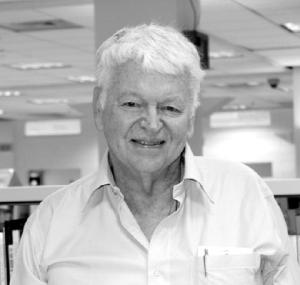 This article by Kenneth Ramchand appeared in Trinidad’s Guardian.

Dr Ian McDonald, author of the novel The Humming–Bird Tree, is to be inducted as a Distinguished Friend of Mr Biswas at a ceremony to be held at the National Library on November 28.

Distinguished Friends of Mr Biswas are elected from among West Indian artists, particularly writers, and from international scholars working on West Indian writing or any related aspect of Caribbean culture.

McDonald (born in 1933) grew up in St Augustine and received a sound education at Queen’s Royal College before taking an honours degree in history at Cambridge University. In 1955 he began a long career in the sugar industry in Guyana, holding key positions with Bookers, later GuySuCo, till 1999, after which he served as CEO of the Sugar Association of the Caribbean.

Early poems like Jaffo the Calypsonian, ‘e Four Knives of Freeman the Cane-Cutter, and The Seine–Pullers are steeped in the popular culture of Trinidad, as is The Humming-Bird Tree. This novel of childhood is at once a loving celebration of the landscape of his native island, an evocation of life and society in Trinidad from the 1930s to the 1950s, and a sad confessional depiction of how social and ethnic bias are implicated in the loss of innocence and harmony.

He became an important part of the Guyanese literary scene as poet, short-story writer, newspaper columnist, editor of Kyk-over-Al, and as chairman of Guyana Publishers Inc, publishers of the Stabroek News. He co-edited the Collected Poems of AJ Seymour, the Heinemann Book of Caribbean Poetry in English, The Bowling Was Superfine (WI cricket writing), and They Came in Ships (an anthology of Guyanese East Indian writing).
He is also a performer. McDonald played tennis for Cambridge University and captained both Guyana and West Indies in the Davis Cup. He is a passionate cricket fan and commentator, and was chosen to deliver the inaugural lecture in the Sir Frank Worrell Lecture Series at London Metropolitan University. His chosen topic was, Cricket: A Hunger in the West Indian Soul.

His syntactically uncomplicated poetry is enriched by pockets of fine description, humour and moving lyicism, and it abounds with ennobling and compassionate portraits of the people of Trinidad, Guyana, and the whole region.

The portraits include Massa Day Done, in which the Master Blaster struts onto the page: “You see how he coming in, how he shoulder relax, how he spin the bat, how he look up at the sun, how he seem to breathe deep , how he swing the bat, how he look around like a lord, how he chest expan’. You ever see the man wear helmet, tell me the bowler should wear helmet, not he.”
The poem ends with a reading of the historical and political forces driving our Viv “as if he alone could end we slavery.”

McDonald’s later poems are a little more serene than the earlier ones as they contemplate ageing, death and the ultimate value/meaning of being here. The mood may be sombre in these later poems but this is one positive man. Nearly everything he writes, early or late, celebrates life, energy, love, and the pleasures of living.

Guyana claims him and has honoured him, and T&T owns him too. But he is a Caribbean man boasting strong family connections with Antigua, Montserrat and Jamaica.

Just as intimate to him is his kinship with the great writers of our region and the world. His great-grandfather translated Ovid and wrote poems including Childe Harold in the Shades, his great-uncle published Songs of an Islander, and his grandmother launched Sunflakes and Stardust, and corresponded with two great West Indian editors and poets, AJ Seymour (Kyk-over-Al) and Frank Collymore (Bim).

Poetry is in Ian McDonald’s genes. He has been writing poems for more than 50 years. His first published one (leaving out his childhood scribblings) is Jaffo the Calypsonian (1955), which had a long run in the CXC syllabus.

McDonald’s experience, versatility, wisdom, and wide-embracing love of poems are in rich evidence in his recently published A Love of Poetry, articles selected from his writings over the last 25 years, mainly from Ian on Sunday’ his column in the Stabroek News.

For the original report go to http://www.guardian.co.tt/lifestyle/2014-11-23/ian-mcdonald-caribbean-man