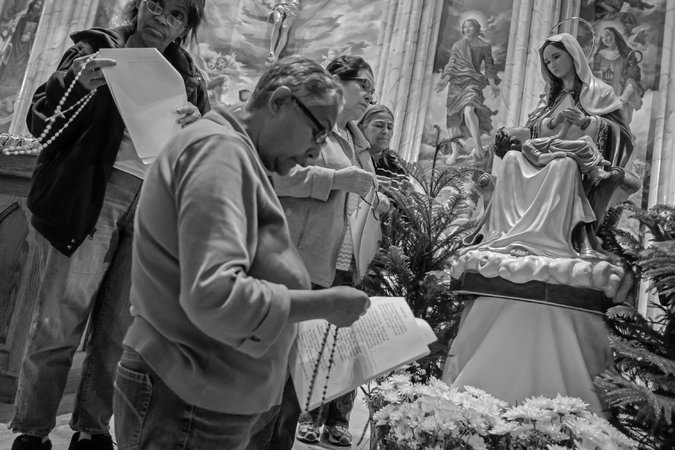 This article by David González appeared in The New York Times.

The hum of prayers being said in Spanish echoed inside the cool, softly lighted sanctuary of St. Brigid Roman Catholic Church in the East Village, where about a dozen people clutching rosary beads encircled the statue of Our Lady of Divine Providence.

The scene looked like something from the 1950s, when the devotion to La Providencia — like many of the faithful themselves — first came to New York, packing churches from the Lower East Side of Manhattan to the South Bronx.

These days, only a handful of mostly older women show up.

“We used to have 250 people come for a novena,” said Aleida Lopez, who spent almost 50 years worshiping at nearby St. Emeric’s Church until it closed and merged last year with St. Brigid’s, forming the parish of St. Brigid-St. Emeric. “The whole parish used to show up. But people get turned off by the closing of parishes. They get cold hearts and lose the faith. Or they move away.”

Heartache for New York’s Catholics as Church Closings Are AnnouncedNOV. 2, 2014
Mass at Church of the Holy Rosary.As Archdiocese Reorganizes, New York Catholics Await News About Their ParishesOCT. 30, 2014
Devotion to La Providencia, whose feast day is celebrated on Nov. 19, was a ritual in the late 1950s that helped ease the pain and struggles of life in a new city for Puerto Ricans who had to fight discrimination on the streets and second-class citizenship in churches, where they were relegated to the basements. It also served as a way to rally the Spanish-speaking faithful, ushering in an era of growth for the city’s Latino Catholics.

Yet six decades after the devotion was introduced to New York by a Spanish Jesuit, the trail blazed by Puerto Ricans has been forgotten, outpaced by the growth in Dominican or Mexican Catholics who bring their own devotions. Earlier this month, the Archdiocese of New York announced the closing of the Church of the Holy Agony, which once was proudly embraced by Puerto Ricans in East Harlem.

“We had very little, and what we had, we fought tooth and nail for,” said Ana Maria Diaz-Stevens, a professor emerita of church and society at Union Theological Seminary and author of “Oxcart Catholicism on Fifth Avenue: The Impact of the Puerto Rican Migration Upon the Archdiocese of New York.” “We Puerto Ricans contributed tremendously in terms of this city’s spiritual well-being and the identity of the Hispanic community. And sometimes that is not recognized.”

In a community formed by migrants, the devotion to La Providencia came from somewhere else, too. Originally an Italian devotion, it was introduced to Puerto Rico in the 19th century. By the 1950s it grew as the Rev. Saturnino Junquera promoted La Providencia as a patron saint for the island, which was undergoing social upheaval through industrialization.

Father Junquera started visiting Manhattan churches in the 1950s, which is when Ms. Diaz-Stevens encountered him at St. Rose of Lima in Washington Heights. He preached about the sacraments, she said, and sometimes his sermons were scary. But the sight of hundreds of fellow Puerto Ricans together in church impressed her.

“For once, they let us go into the main church because people from other parishes had come down and the lower church was not big enough,” she said. “I remember listening to him from the choir loft. I remember what I was wearing that day, a little pink dress my sister had bought me. And I remember looking down on the congregation and seeing so many people gathered together.”

Continue reading the main storyContinue reading the main story
It is easy to understand the power of the symbolism of the statue of Our Lady of Providencia, which depicts the seated Virgin Mary looking peacefully upon the child Jesus, who is resting in her lap. It promises protection. In a city where the Italians had Our Lady of Mount Carmel and the Irish had St. Patrick, Puerto Ricans finally had theirs, La Providencia.

“We didn’t know where we stood, what was our role,” Ms. Diaz-Stevens said. “It’s interesting, her name means ‘the one who provides,’ the idea of mediating between us and God, and giving us that motherly protection. People talked about Puerto Ricans being fatalists when they say, ‘If God permits it.’ But here that is turned upside down. We’re not crazy when we say, ‘If God permits it.’ We know God will provide and the Blessed Mother will mediate. That’s not fatalism. That’s faith in Providence.”

That’s another reason for the devotion’s changing fortunes: People did well and moved away. Or, in neighborhoods like the Lower East Side or East Harlem, they were also pushed out by rising rents in gentrifying neighborhoods. And the closing of parishes did not help: This year, there will be no traditional Puerto Rican plenas played at the Mass in honor of La Providencia, because the musicians decided not to join the merged St. Brigid-St. Emeric.

“It was so beautiful,” Ms. Lopez said. “We had such a big, active parish. Oh my God, those traditions. And now they are closing more churches. Imagine.”

For the original report go to http://www.nytimes.com/2014/11/17/nyregion/for-puerto-rican-worshipers-la-providencia-is-the-saint-who-protects.html?_r=0