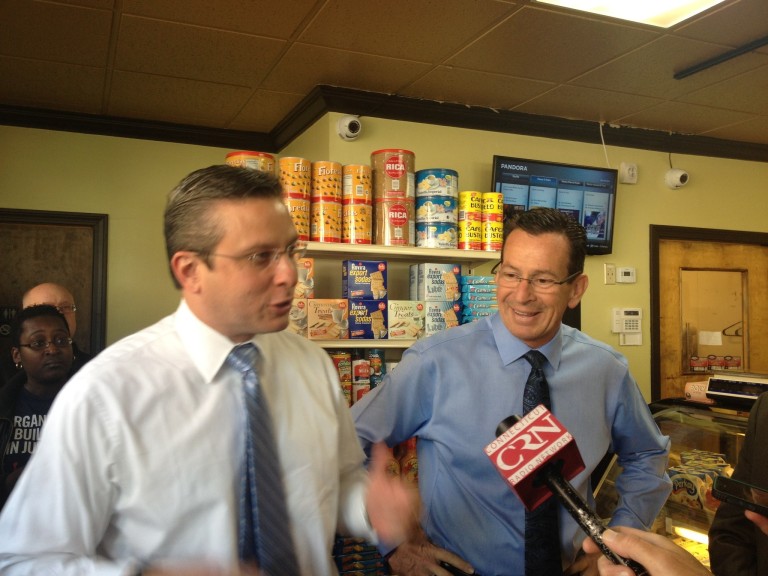 Padilla and Democratic Gov. Dannel P. Malloy embarked on a whirlwind tour of the state’s largest cities, an itinerary that included stops at a Spanish radio station in New Britain, a senior center in Bridgeport and a Puerto Rican restaurant in Waterbury.

“I’m here to ask every Puerto Rican, every Dominican, every Mexican, every Latino to go out and vote for Dan Malloy next Tuesday,” Garcia Padilla told a small crowd crammed into Pan del Cielo, a bakery on Prospect Avenue in Hartford.

Malloy’s Republican opponent, Tom Foley, is also courting Latino voters. On Saturday, he is scheduled to campaign in Waterbury with Luis Fortuño, who preceded Padilla as Puerto Rico’s governor.

Foley, who is locked in a statistical dead heat with Malloy, according to several public polls, is not ceding the traditionally Democratic cities to the governor.

“Tom has been engaging with the Latino media and engaging with community leaders,” said his campaign spokesman, Mark McNulty. “He has put a substantial emphasis on focusing on the cities, on all constituencies…and everyone across the state is reacting very positively to Tom’s message of lower taxes, more job and better paying jobs.”

When Malloy and Foley first faced one another four years ago, urban voters provided the Democrat with an edge and helped contribute to his hair-thin margin of victory.

This time around, Malloy said he hopes for a high turnout of Latino voters. “I would love to see the Latino vote represent 7 or 8 percent of the whole voting public,” he said. “We build it in to our models at about 6 percent…One of the reasons that I’ve asked [Garcia Padilla] to come and that he was more than willing to come is to try to drive that percentage up by one full percent, maybe two full percent. That would be great for us…so we’re going to be visiting the places where the Latino population is largely concentrated which are more urban communities.”