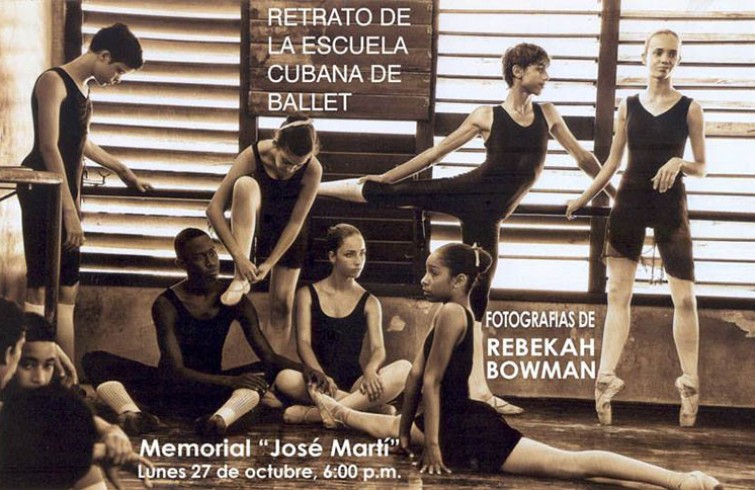 According to Liz Beatriz Martínez (On Cuba), there will be several exhibitions on view as parts of the events related to the 24th International Ballet Festival of Havana [see previous post The 24th International Ballet Festival of Havana]. One is “Portrait of the Cuban School of Ballet,” curated by Roberto Chile, which opens tomorrow (Monday, October 27, 2014) at the José Martí Memorial. Another exhibition is “In good hands … the ballet” by photographers Nancy Reyes and Luis Alberto Alonso. See more information below:

As part of the side events of the 24th International Ballet Festival of Havana, the exhibition “In good hands … the ballet” by photographers Nancy Reyes and Luis Alberto Alonso has been inaugurated.

The sui generis sample exhibits different facets of the most universal Cuban artist through her hands; which become obvious corollary of memory and learning representing prima ballerina assoluta Alicia Alonso. Snapshots also capture twists and poses typical of the leading figures of the prestigious National Ballet of Cuba.

Another photo expo titled “Portrait of the Cuban School of Ballet” and curated by Roberto Chile, is also planned to open at the José Martí Memorial next Monday, at six o’clock. In it, the American photographer Rebekah Bowman proposes more than twenty images in medium and large format that catch for eternity multiple times of classes and rehearsal within the National Ballet School.

Dr. Miguel Cabrera, Historian of the National Ballet of Cuba, said that in addition to being valuable testimony, exposing Bowman is a tribute to the rich heritage of the institution, and is also the display of the inexhaustible resources will nurture the future of Cuban ballet.

One thought on “Photographic Exhibitions: Cuban Ballet on Display”