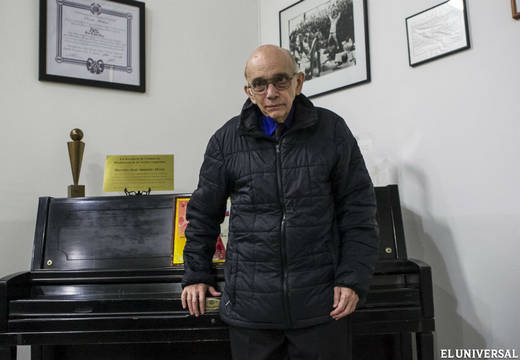 Maestro Abreu underscores that “El Sistema” is aimed at “rescuing low-income children and teenagers by means of music”, aS Caracas’ El Universal reports.

The founder of the Venezuelan System of Orchestras, José Antonio Abreu, an economist, does not believe in untalented children for music. His purpose, therefore, is to make every Venezuelan a musician and help vanquish fear, lift self-esteem and love the beautiful things of life by means of music.

“Any child, any youngster has the potential of the musical art and the orchestral development just powers such endowment,” said the laureate of the prize Prince of Asturias of Arts 2008 in an interview with Efe.

“Maestro Abreu,” as everybody calls him in Venezuela, remembers that the symphonic project known as “El Sistema” and founded 40 years ago is rather social. Its main objective is “rescuing low-income children and teenagers by means of music.”

For children with social disadvantages, learning a musical instrument “opens a shiny road, ennobles and dignifies.”

“Development of music arouses many intellectual potentials underlying in children. For instance, it favors talent for mathematics,” said the founder of more than 800 orchestras and almost 400 choirs. Over 500,000 Venezuelan children and teenagers are members of El Sistema.

Abreu does not want his project to stop growing, but to give every child a place in the orchestras. In his view, such goal is possible, as the Venezuelan State has fully backed El Sistema.

Projects that have grown under the aegis of El Sistema include eight centers of the Penitentiary Academic Program, where “hundreds of prisoners” have formed part of penitentiary orchestras, and the Special Education Program for children with disabilities.

“We want to sow music in every sense; hence we work with children under medical treatment,” Abreu added.

At the end of 2014, Maestro Abreu has his sight on a special orchestra, the Youth Symphony Orchestra of Caracas, established in 1980 and composed of 200 musicians of 18-24 years of age. They are getting ready for a tour of Europe, including performances in France, Switzerland, Germany, Croatia, Hungary, Austria and Sweden.

Abreu commented that top government authorities of the visited countries have confirmed that they will attend the concerts of the Youth Symphony Orchestra. In addition to the works of Russian composers Dmitri Shostakovich and Igor Stravinsky, and Swedish Rolf Martinsson, the works of Venezuelan authors Evencio Castellanos and Antonio Estévez will be played.

The experience of El Sistema has been replicated overseas, including France, Greece, most of South America and some Central American and Caribbean countries.

For the original report go to http://english.eluniversal.com/nacional-y-politica/141018/jose-antonio-abreu-any-child-can-be-a-musician