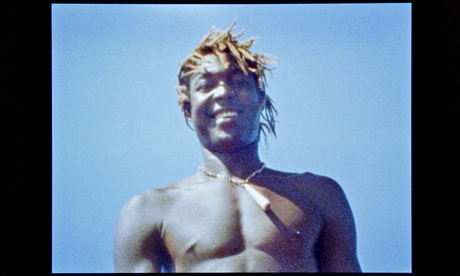 The artist returns with a heartbreaking meditation on young black men dying before their time at the Thomas Dane Gallery in London. Adrian Searle reviews the exhibit for The Guardian.

The beautiful boy stands in the sun, the horizon rising and falling behind him as the boat rocks and turns in the Caribbean swell. Playing up to the Super-8 camera following him, the boy poses and lounges on the little deck, dressed only in faded blue shorts. He knows the camera loves him. At one point he falls, perhaps on purpose, into the waves, grinning wildly as he heaves himself back on board. I can’t take my eyes off him. He is so vividly alive.

For a long time, Steve McQueen forgot about these few minutes of film, shot by Dutch cinematographer Robby Müller; they languished among the unused rushes for McQueen’s 2002 film Carib’s Leap. Filmed in Grenada, Carib’s Leap focuses on everyday Grenadian life: the fate of the Amerindians who once lived there, and the current plight of the descendants of African slaves who form the majority of the island’s population. McQueen’s parents were born there.

The soundtrack cuts through the glorious day. Over the sound of the sea, two local men talk about their friend Ashes, who discovered a stash of drugs on a beach. He thought it was his lucky day. He thought he’d get rich. Soon after, some guys came looking. “They shot him in the hand for him to let go of what he was holding. And when they shoot him in the hand, he let go. But he tried to run and then they shoot him in the back and when he fell one of them guys went over to him and shoot him up around his belly and his legs and thing. And that was about it.” Ashes was the boy on the boat.

When he returned to Grenada last year, McQueen asked if Ashes was around and recorded the story he was told. Ashes is a very simple, direct film. A boy in a boat, the story of his murder. The boat sways and the camera with it. Ashes smiles and laughs, grinning with the pleasure of being alive and the focus of attention. He knows how good he looks, cocky with the thrill of it. Now he’s gone. The footage never made it into Carib’s Leap. It is as if it was waiting for its time. The important thing is that McQueen remembered the footage Müller had shot. It’s as if the film found him.

Double-sided posters, featuring a blown-up, grainy still of Ashes facing away from the camera, stand on a wooden pallet outside McQueen’s film installation. The image on one side of the posters is overprinted with a transcription of the short script, the plain details. You can take the poster away. So Ashes’ story is going into circulation, just as McQueen wanted images of the dead British service personnel to circulate as postage stamps in his Queen and Country project.

A few doors up the street, in Thomas Dane’s second London gallery, stand a pair of sculptures. A black cylindrical granite column with a hefty pedestal stands on a wooden pallet, as if dumped by a forklift truck. The shaft of the column is sheared off and broken, just above head height. A smaller, second version of the same object sits under Perspex on a white plinth. The small version is a sooty, matt black. Its dull surfaces seem to eat the light. Black dust has collected around the base, on the upper face of its plain black pedestal. Each sculpture occupies a room of its own. They are meant as a single sculpture. McQueen sees it as a kind of portable monument to lost and wasted lives: the premature and avoidable deaths from drugs, shootings, suicide and Aids were on his mind. The death of Ashes, the shooting of Michael Brown in Ferguson, Missouri, and innumerable others.

Last month, McQueen was given the WEB Du Bois medal at Harvard University, which recognises outstanding contributions to African-American culture (Harry Belafonte, the late Maya Angelou, architect David Adjaye and Oprah Winfrey were among other recipients). “My only commitment – my only doctrine – is to not let the dust settle,” he said. Black dust has already accumulated and settled, under glass, around the base of the smaller column.

Broken Column takes the cliche of monumental Victorian cemetery masonry and turns it into something else (as Barnett Newman did with his Broken Obelisk in the 1960s). It is as terse and plain as a punch in the gut.

The sculpture could be taken as a figure. I think of McQueen, standing immobile as the dust whumps around his feet while the wall of the barn crashes round him in his 1999 Turner-prize-winning film Deadpan. I think of Solomon Northup in 12 Years a Slave, half-lynched, struggling to stay upright with the noose around his neck; and Solomon’s speech, when he says: “I don’t want to survive. I want to live.” I think of the horizontal sarcophagus-like blonde-wood cabinet in McQueen’s Queen and Country. That too is something like a sculpture, as much as it is a display cabinet. Both the cabinet and the columns signal a kind of struggle against invisibility and death.

Perhaps the closest link Ashes has to earlier works by McQueen is found in the film 7th Nov. This 2001 work is a single shot of the back of McQueen’s cousin Marcus’s head, over which we hear Marcus describe, in tragic detail, how he accidentally shot and killed his younger brother. Marcus’s monologue, and the voices in Ashes, are at odds with the image on the screen. The disjunctions are abrasive and elegiac. So, too, with Broken Column. It is an art of resistance.