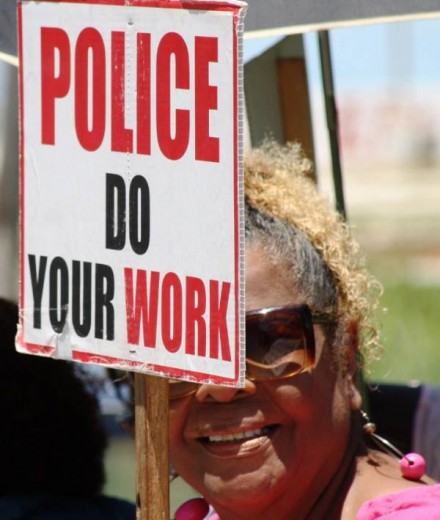 Feminist Conversations on Caribbean Life (a blog by Code Red for Gender Justice) expresses deep dismay at how female rape victims are treated, pointing out the unjust treatment, indifference, lack of sympathy, or downright disrespectful attitudes of different institutions, in particular, the police force and the health care system. The author underscores the sexist ideologies that continue to feed misunderstandings regarding rape in many Caribbean countries. See excerpts here and the full post in the link below:

After an indigenous Guyanese woman reported that she was drugged and gang-raped at the hotel where she worked and police had no intention of investigating the rape, women took to the streets in protest and solidarity. One local newspaper alleges that police are not investigating the rape because the woman admitted to “drinking Red Bull and Hennessey”. [. . .]

Gross misunderstandings about just what rape is and how rapists select their victims, sexist expectations that responsibility to prevent rape lies with women who should discipline their bodies and movements as prevention measures, detract attention from the fact that in effect “rape of the most vulnerable has been decriminalised.”

Research from the UK has demonstrated that rape of the most vulnerable women has been effectively decriminalised where 2 of every 3 rape allegations are not pursued beyond the investigation stage. In other words two thirds of rape allegations do not make it to trial. Researcher Betsy Stanko identifies the following attributes which result in the likelihood that a reported rape will not make it to trial:

She notes that “80 per cent of people reporting rape to the Metropolitan Police are considered vulnerable to sexual attack for one of a range of reasons – including being under 18, having mental health issues or learning disabilities, having drunk alcohol or taken drugs prior to the attack and being in an intimate relationship with the suspect.” She concludes that rather that seeing these women and girls as unreliable witnesses, police investigators need to take a person’s vulnerability as evidence that they are more likely to be raped and investigate whether that vulnerability was exploited by the suspect.

In parts of the Caribbean where there is a lack of access to healthcare and forensic facilities due to state racism, ineffective and sexist justice systems and where women may be expected to consume alcohol as part of their jobs, these too must be viewed as factors which make women more vulnerable to rape and as vulnerabilities that rapists exploit.

Rapists also exploit the sexist ideologies which persist in the region. Such sexist ideologies are frequently presented in our newspapers. For example, A young Barbadian columnist wrote about teaching his two-year-old daughter about “modesty and decency”, noting that “My heart burned and my eyes filled with tears as I saw the pictures and videos on Facebook of girls and women exposing their bodies and sexually gyrating on strangers in the name of fun, revelry and freedom. I am still lost for words and can’t find one single person to convince me that this is acceptable behaviour.” He then compared the thousands of women who participate in this year’s Crop Over festival to “prostitutes”. Ironically, believing that a two-year-old needs to be taught “modesty” suggests a sexualization of infant girls’ bodies. It suggests that it were possible for a two-year-old to even be “immodest”. We need to push back against the sexualization of girls’ bodies and recognise that this supports sexual violence against them.

A two-year-old girl does not need to be taught to discipline and police her own body. [. . .] Our bodily integrity needs to be respected, whether we are two years old or ninety-two years old. Whether we work in a bar or the boardroom. Whether or not we fight back with our fists or are too scared or intoxicated to do so. Whether or not we’ve had sex with you in the past. Or were wearing a short skirt. Or out alone at night.

And when our bodily integrity is violated, the healthcare systems, legal systems and victim support systems need to be working at optimum. [. . .]

What’s the excuse really? Why are police officers sharing sensitive information with the media and in such callous and ignorant ways? Why are they not investigating rape when it is reported? Why are rape survivors unable to access the required healthcare? Why is sexism given space in our national newspapers?

Do we really care so little for women?