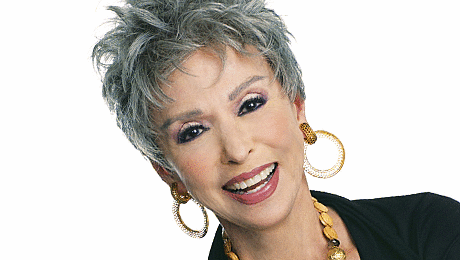 Rita Moreno has one eye on the TV news as she talks from her home in Berkeley, Calif, to John Monaghan of Detroit’s Free Press. She comments on Detroit’s plans to recover from bankruptcy (a success, she thinks) and the escalating violence in Iraq (probably impossible to solve). She recalls her meetings with Presidents George W. Bush and Barrack Obama, both of whom gave her awards not only for her stage and film accomplishments but also for her tireless work on behalf of the Hispanic community.

“Who knew I would be a role model?” she says before talking about her upcoming appearance at Detroit’s Redford Theatre, where she will host screenings of the 1961 musical “West Side Story.” Her role as Anita, best friend of Natalie Wood’s Maria, earned her an Oscar for best supporting actress. She is one of the few performers to hold the four major entertainment awards: a Tony, Emmy, Oscar and Grammy.

Born Rosa Dolores Alverio in Puerto Rico, the 82-year-old Moreno moved to New York City with her mother at the age of 5. She took dancing lessons, and by age 11, was lending her voice to Spanish-language versions of American films. Her first Broadway role at age 13 caught the attention of talent scouts, leading to a contract at MGM. She disliked most of the work she got early in her career because she was often cast in peasant or prostitute roles.

QUESTION: Recently I saw “Singin’ in the Rain,” where you played a very non-Hispanic Hollywood starlet named Zelda Sanders. How did that come about?

ANSWER: Good old Gene Kelly, bless his heart. It was his movie, so he cast everybody. It was only the second movie I had made, and it was a really tiny part. I used to visit the sets all the time. When I wasn’t assigned to a film, I would put on my makeup, get all dressed up and go visit the studio, the studio of my dreams. Understand that at the time MGM was really major. Here I was, this little Puerto Rican girl, just astonished that I was here.

So I visited all the sets, the “Summer Stock” set with Judy Garland, the Humphrey Bogart set, wherever they were filming. If I learned anything, it was by accident because I was just this set of two big eyes, taking it all in, just astonished that I was allowed to be here. It was a fabulous time in my life.

Q: So how did “West Side Story” come about?

A: When I did “The King and I” on Broadway, Jerome Robbins remembered me and asked me to audition for “West Side Story” in New York for Broadway. I got cold feet. I was really scared because I hadn’t done a play in too many years and thought I couldn’t cut it. After it opened and it was very successful, I went to see it and saw Chita Rivera in the role. I thought, “Did I goof or what?”

(When the movie opportunity came) I had so many things going against me that it’s astonishing that I ended up with the part, though I wanted it so desperately. … I took every class they had, working from 9 in the morning to sometimes 10 at night … then I ran into a friend, a dancing friend, who had played Anita on the road in a bus-and-truck company, and she helped me with the steps and stuff like that.

Q: Did you bring a lot of yourself to Anita?

A: I knew Anita. She was me without the gangs, a girl looking for respect and a girl filled with energy, which I had always been. It was the first time where I played a young Latino woman who could read and write, who wasn’t a white man’s toy, who had self-respect and dignity and strength. She became my role model. This is what I always wanted to be and no one allowed me to be. I never had a role model because there weren’t any. My role model out of very little choice was Elizabeth Taylor because she was a young woman like me and she was gorgeous beyond belief.

Q: The Redford says it is going to show your Oscar speech before the screening. It is famous for its brevity. You really had no idea you were going to win?

A: You can see it on the video. I was surprised. I was amazed. I was so positive that Judy Garland was going to get it for “Judgment at Nuremburg.” I had flown in from Manila where I was making one of those crappy World War II movies … so I was exhausted. George (“West Side Story” costar Chakiris) was my date. We’re close to this day. He’s my daughter’s godfather, and it was just so embarrassing because I had nothing to say. It has to be one of the shortest acceptance speeches in Oscar history.

Q: You had a lot more opportunities after “West Side Story.” Where do you keep all of those awards? Are they in sight right now?

A: I’ll tell you where they are. They’re on a beautiful small inlaid table, all of the awards clustered together on this beautiful little table. And also included is my grandson’s soccer trophy. You know, that gold plastic. It’s every bit as important to my grandson as these are to me. When he was a little boy, he and his younger brother used to play with the Oscar. They called him the Little Gold Man. For the longest time, they had no idea what they were handling. One day, he came home with this trophy, and he was so proud. He said, “I think it should be put next to the Little Gold Man.” I said, “You bet, and that’s where it will stay forever.” And that’s where it is now.

I know I sound casual about this, but I’m really not. Once in a while I do go by them and say: “Wow. All these awards, and I’m Puerto Rican to boot.” It really is amazing.

With appearances by Rita Moreno