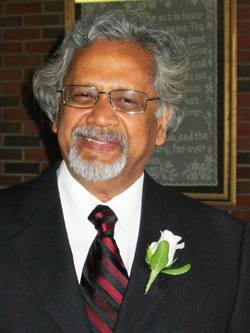 A tribute from Ameena Gafoor, editor of The Arts Journal.

The Arts Journal is deeply saddened at news of the passing of Professor Victor Ramraj on 25th August, 2014 in Canada.

Victor Ramraj was a dear friend and a much-admired colleague. Born on 24th October 1941 in then British Guiana, on the evergreen rice producing island of Wakenaam, Ramraj received his secondary education at St. Stanislaus College before proceeding to the University College of the West Indies (London) – now UWI Mona, Jamaica – where he gained a BA degree in English literature and won the heart of his life’s companion, Ruby. Ramraj gained a doctorate in Canadian Literature from the University of New Brunswick before joining the University of Calgary as a Professor. During his 44 years in Canada, Ramraj never lost the common touch, returning often to his homeland to fraternize with family and friends as well as to make valuable contributions in the literary arena.

Ramraj possessed a highly sustained passion for literature and an astute critical mind. As a scholar in the literatures of emerging nations – Commonwealth Literature, Third-World Literature, International English Literature, Postcolonialism – he ensured that formerly marginalised voices were heard, understood, and given their place in the world as evidenced in his Anthology titled Concert of Voices: An Anthology of World Writing in English (1995; reprinted four times). Also to his credit is Mordecai Richler (Twayne Publishers, 1983).

An active member of the international literary community, Ramraj served in a number of capacities: as a scholar, professor, playwright, anthologist, editor, critic, judge, organizer and more. He has been chief judge of the Guyana Prize for Literature on at least two occasions; he was editor of the academic Journal, Ariel: A Review of International English Literature (based at the University of Calgary); he sat on the Editorial Board of The Arts Journal and edited Volume 2 Number 1 (2005); he was also preparing to co-edit Volume 10 Numbers 1 and 2 (2014) of The Arts Journal which he had already subtitled Encore! In recognition of the 10th anniversary of this Journal. We feel his loss keenly.

Ramraj’s work appears in countless literary Journals while he has delivered numerous addresses and lectures including his 2009 Annual Lecture to the Ghandi Society at Calgary, Canada. Many of us will not easily forget his illuminating lecture in Georgetown on the subject of Post-Modernism many years ago; and on 25 June 2014, at the Canadian High Commission in Guyana, he delighted his audience on the work of 2013 Nobel prize-winning Canadian author Alice Munro who he described as a “Fantastic Portrayer of Human Beings”. It was to be his last lecture.

Ramraj always attended the ACLALS and CACLALS Conferences, always accompanied by his charming wife, Ruby, a brilliant literary scholar in her own right. They both possessed an abiding love for the arts and culture and recognized literature as a reservoir of society’s values and beliefs, thus they contributed to the humanizing of society through their work.

Literary scholarship has suffered a telling blow with the passing of Victor Ramraj. It has lost not only a scholar of the highest repute, but also a fine human being. He evidenced the best that a person and a scholar can be. He was dedicated to his work, possessed a wry sense of humour, was supportive of scholars he met, amiable and generous as a person and graceful in his conduct. He will be greatly missed by all whose lives he touched.

The Arts Journal notes Ramraj’s outstanding contribution to the common pursuit. We extend sincere condolences to his wife, his children, his grandchildren, and other sorrowing relatives. May his Soul Rest in Peace.

2 thoughts on “The Arts Journal Mourns the Death of Prof. Victor Ramraj”