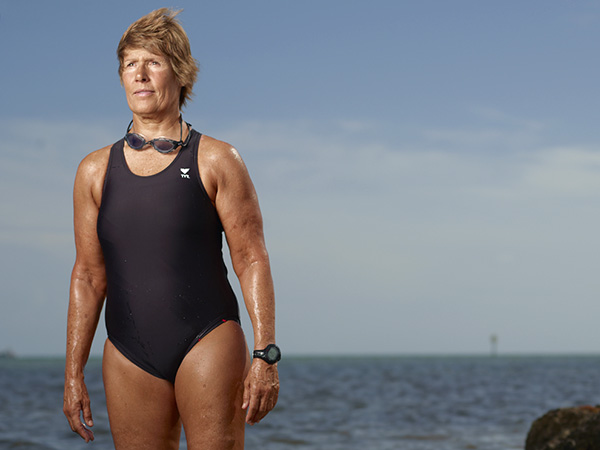 Today, Cuba awarded the “Order of Merit in Sports” to U.S. swimmer Diana Nyad, who a year ago became the first person to swim the 177 miles between the Havana coast and Key West in Florida, without protection against sharks and spending nearly 53 hours in the water, Cuba Debate reports.

The first vice president of Cuba, Miguel Díaz-Canel, presided over this solemn ceremony in which he stressed Nyad’s qualities of “will power, courage, tenacity and perseverance.”

The honoree said she was very proud and honored to receive the award, the highest for an athlete on the island, as Cuba has always been in her heart and making that journey was for her and her team a complete sporting challenge.

Nyad reached the coast of Florida on Sept. 2, last year, when she was 64, after swimming for 52 hours and 58 minutes. This was the fifth attempt by the swimmer, who undertook this journey for the first time in 1978, when she used shark protection but failed to reach her goal because of adverse weather conditions.

Later, she tried again, twice in 2011, and then, in August 2012, after having completed more than 60 miles, she had to leave the path because of jellyfish stings.

In a press conference following the press event, Nyad acknowledged that the second night of the fifth and successful attempt she was about to throw in the towel because she was very cold and felt her body couldn’t make it.

“I spent the whole time next to my team’s boat without touching it because if I did, the trial was invalid, and told them I could not go on. Bobby [her coach] told me to do five strokes and ‘if you cannot do more, quit,’“ she said today.

“When I had hardly any strength left, he told me to do five and then asked me for five more. And so on until I had the strength to continue,” she added.

When retrieving the pace, she saw a light on the horizon that she thought was the sun, which prompted her because she thought it would get warmer. But the final push came when her team was told that the light was not the sun, but the lighthouse off the coast of Key West, Fla.

The swimmer had nice words of appreciation for all the 39 people on her team.

Her next challenge is to walk across the United States, from California to Washington, D.C., in 2016, for three months with a million people as part of a campaign to fight obesity.

Throughout her successful career, Nyad became the best long-distance swimmer in the world, and set several records, including seven hours and 57 minutes around the island of Manhattan in New York, when she was 50 years old.

For the original report go to http://www.workers.org/articles/2014/09/06/cuba-awards-nyad-order-merit-sports/