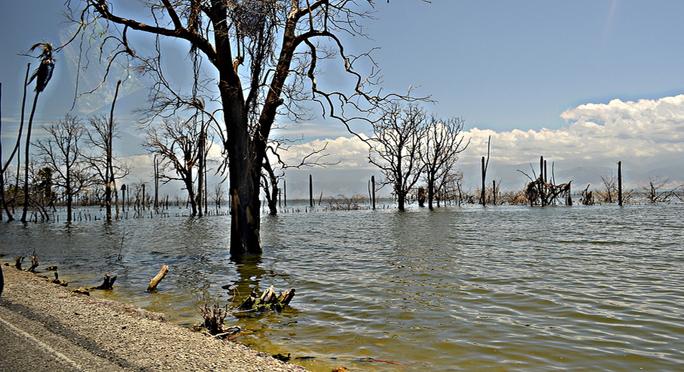 In “Lost on the Lake,” Rocky Kistner explores the effects of climate change on Lake Enriquillo and the disappearance of entire towns swallowed up by rising waters, such as area of Boca de Cachón. He focuses on an excellent documentary film produced by VICE News and hosted by Vikram Gandhi: The Lake That Burned Down a Forest. The film brings attention to the destruction caused by the rising lake level but also to the inevitable disaster caused by displaced farming communities, which—after losing their agricultural lands—have resorted to illegal charcoal production. This practice, which involves cutting down the forest, adds to the rapid and total devastation of the area. The film also brings attention to other lakes, such as Lake Azuei, which has also begun to take over lands. [See previous posts Lake Enriquillo: Rising Tide Is a Mystery That Sinks Island Hopes, The Caribbean’s biggest lake recovers level after harsh drought, and Swelling Lake Erases Haiti-Dominican Border.] Here are excerpts with a link to the full article and film below:

Tourists flock to the Dominican Republic to savor its crystal white beaches, lush tropical reefs, and meticulously manicured golf courses. But they may not realize that further inland, a climate disaster is growing: an enormous lake is expanding by three feet a year, swallowing whole towns and leaving a farming society with no land left to cultivate.

In this short documentary, host Vikram Ghandi [sic] takes us on a tour of the devastation caused by Lake Enriquillo, the largest body of fresh water in the Caribbean. Increased rainfall fueled by warming ocean waters has submerged 40,000 acres of farmland and forests in a watery grave and sent communities scrambling for a new way of life.

As gully-washing extreme rainfall events pour into Lake Enriquillo, displaced residents have turned to less sustainable occupations, such as the illegal charcoal trade (and in some cases, cockfighting). Desperate Dominicans have been heading into the region’s woodlands, slashing and burning trees for charcoal production. Once forested mountains have transformed into barren, eroding wastelands. So now when rain falls, it washes life-sustaining topsoil into flooded fields, streams, and lakes.

“Everything will die. There will be no wood left, no bushes,” says a local conservationist working to save Jaragua National Park. “All species will die … and when the reptiles die, the birds die, we are going with them as well.”

[. . .] “Seemingly insignificant changes in the climate can have implications beyond anything we could have imagined,” narrates Ghandi. “What will be next climate change chain reaction? Where will we see the next Lake Enriquillo?” [. . .]

You may see The Lake That Burned Down a Forest here: https://www.youtube.com/watch?v=s6322_yP-20

One thought on “The Lake That Burned Down a Forest (Lake Enriquillo, Dominican Republic)”