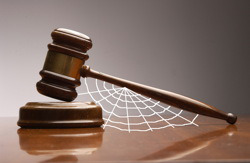 Calling it the toothless Caribbean Court of Justice, this Barbados Free Press article speaks about the mounting embarrassment due to unending incidents and the chaos and corruption surrounding the entity:

That’s not what has the CCJ in chaos though – it’s a series of recent incidents that some say threatens the court’s continuance. News 7 in Belize put forth an excellent summary, but the news articles just keep coming including corrupt conduct by a Justice…

Check out the following:

The Caribbean Court of Justice is the highest Court in Belize, Barbados and Guyana but right now the court is under pressure at its headquarters in Trinidad. News reports from Port of Spain say that the court is facing internal legal battles resulting from a series of dismissals, resignations and suspensions of senior managers. The Court says it is restructuring after 10 years, but half of the 72 employees have joined a union to lodge grievances against the court – mainly about a change in the salary payment system.

On top of that, the court’s senior managers have hired an attorney who is preparing to file suit against the court according to the Trinidad Sunday Express.

Perhaps most damning is the account from the dismissed acting registrar of the Court, Jamaican Dr Leighton Jackson, who was escorted out of the Court’s Headquarters in May. He told the Jamaica Gleaner, quote, “Based on the incidents of mismanagement, arbitrariness and judicial misconduct, I think the current structure of the court is incomplete and insufficient” end quote.

His predecessor Paula Pierre had resigned at the end of 2013 citing what she called a toxic atmosphere to work in. Jackson is also contemplating legal action against the CCJ. [. . .]

2 thoughts on “Mounting Embarrassment Surrounding the Caribbean Court of Justice”