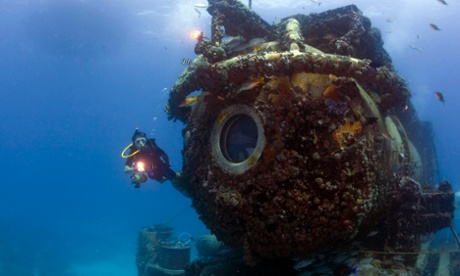 Fabien Cousteau and a team of aquanauts were together on land for the first time in 31 days on Wednesday to celebrate the end of his record-breaking underwater stay. “It was amazing how much it felt like home,” said Cousteau, who with two other scientists lived underwater for the entire mission, using the world’s only underwater marine laboratory, Aquarius, as a home base. “I can imagine for someone who doesn’t like tight spaces it could be much more difficult,” he added.

Mission 31 ran just one day longer than the underwater adventure that inspired it – one which was lead by Cousteau’s grandfather, the renowned oceanographer Jacques-Yves Cousteau. The younger Cousteau said he hoped his 2014 mission would increase support for ocean conservation, a message his grandfather helped bring to the public, along with providing a platform for several climate change studies.

The lab is situated 63ft below the surface in the Florida Keys and is operated by Florida International University (FIU). The 81-ton vessel has six bunk beds, hot water, a mini kitchen, air conditioning and computers and served as home to the trio, along with a rotating crew of scientists and visitors including marine biologist Sylvia Earle. [. . .]

The point of the mission, though, was to spend as much time as possible outside of the vessel to conduct experiments and become more attuned to the ocean environment. Cousteau, who only saw daylight for the first time in 31 days five hours before speaking to the media, said some of his favorite experiences underwater included “making friends with a porkfish” and “looking out the window and seeing sharks or a barracuda”.

Mark Hulsbeck, who along with Ryan LaPete spent the entire 31 days with Cousteau, celebrated his nonconsecutive 200th day at Aquarius during the 31-day stay. “You’ve been to aquariums where you are watching fish?” Hulsbeck said. “Well there, they were watching us.”

Cousteau estimated that at least 10 scientific papers would be created from the research conducted during the stay. The team also set up long-term monitoring systems to further inform their studies. [. . .]