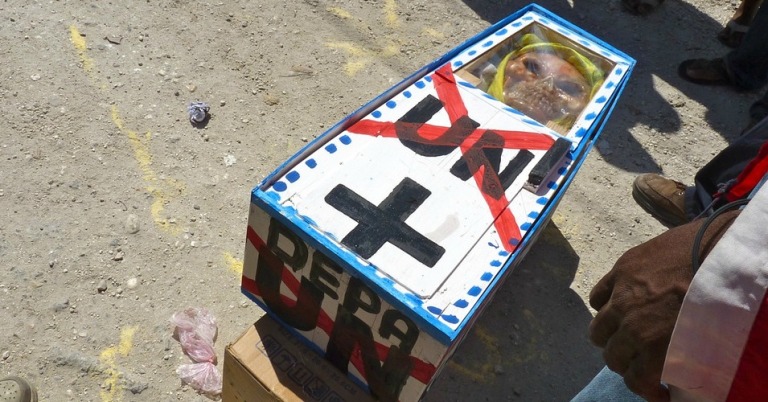 Andrea Germanos (Common Dreams) writes that United Nations Secretary General Ban Ki-moon was personally handed papers for a class action lawsuit demanding UN compensation for the deadly cholera epidemic it brought to Haiti, according to lawyers for the victims.

According to reporting by the Miami Herald and Reuters, the lawyers say Ban was handed the court papers [last] Friday as he was walking into an Asia Society event in Manhattan where he was to give an address.

The cholera epidemic has killed over 8,500 Haitians, sickened hundreds of thousands, and is expected to continue to claim lives. After years seeking legal redress, a class action lawsuit representing 1,500 victims was filed in a federal court in Brooklyn in March. The suit “seeks to force the U.N. to take responsibility, compensate victims, and bring critical sanitation to the devastated Haitian communities the U.N. was sworn to protect.”

Adam Houston, a Legal Fellow with the Institute for Justice & Democracy in Haiti, an organization involved in the litigation against the UN, wrote this week in the Health and Human Rights Journal:

The origins of the epidemic can no longer be considered a matter of real debate. Overwhelming scientific evidence demonstrates conclusively that the strain of cholera responsible for the epidemic arrived in Haiti with a Nepalese contingent of UN peacekeepers. Despite a concurrent cholera outbreak in Nepal, troops were deployed without taking proper steps to mitigate the risk they would take the disease with them. Once in Haiti, reckless sewage disposal practices allowed contaminated human waste to enter the Artibonite River, the primary water source for tens of thousands of Haitians. This sequence of events has been confirmed by a series of investigations, including one conducted by an independent panel appointed by the UN itself.

A UN spokesperson denied that the UN Secretary General had taken the papers, but Stanley Alpert, one of the lawyers representing the victims, said he “was served personally. Not wishing to receive what he was given is not a defense,” Reuters reports. “He must now answer or move or be in default personally and for the U.N.,” Alpert said.

According to tracking by the Center for Economic and Policy Research’s Haiti Relief and Reconstruction Watch, it has now been 1,341 days since cholera was introduced to the county that the UN has failed to offer an apology.